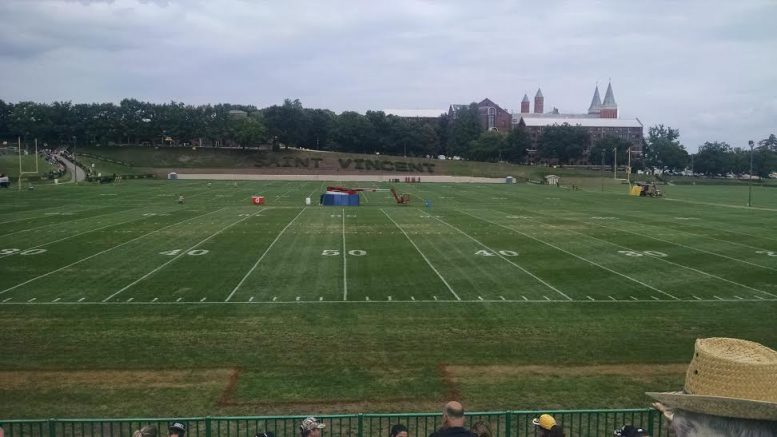 At the conclusion of Wednesday’s closed practice, the Pittsburgh Steelers are reportedly scheduled to spend one final night at Saint Vincent College in Latrobe before finally ending their annual training camp on Thursday. With camp about to break, the team enters the rest of their preseason schedule with several key concerns related to this year’s roster and below are the top five from where I currently sit.

Feel free to touch on any of these five in addition to listing any of your additional concerns in the comments below.

A Green lemon? – After predictably starting off training camp on the team’s Active/PUP list because of offseason surgery on his ankle, new tight end Ladarius Green unpredictably remained sidelined for his entire time spent in Latrobe. Beat writers insist that Green is currently in concussion protocol due to him experiencing recurring headaches, not because of his ankle, while head coach Mike Tomlin says no players on the roster currently have that designation. While Green reportedly had sessions on the side throughout training camp with members of the team’s medical staff, that’s as far as it’s gotten with him and there are no signs that he’ll be removed from the PUP list anytime in the near future. Will the team’s “prize” free agent signing ever play a down with the Steelers, or will general manager Kevin Colbert wind up wishing he had ordered a Car Fax on the former San Diego Chargers tight end because of the previous concussions that he reportedly suffered?

Deebo in limbo – The battle between the NFL and Steelers linebacker James Harrison is finally coming to a head as the veteran received word earlier this week that he’ll likely be suspended should he not agree to meet with the league as part of their ongoing PEDS investigation. Should Harrison ultimately hold his ground and a refuse to interview with the league, he’ll need to hope the NFLPA files some sort of injunction in the courts that could ultimately allow him to play while his case is heard. While Harrison is certainly a team player, he’s also a principle-driven man and a proud one at that. We should know by Aug. 25 what his decision is and if he chooses to stand his ground, his availability for the 2016 season will likely remain very cloudy.

Slotted concerns – 2016 was supposed to be the year that former second-round draft pick Senquez Golson started to pay dividends in the defense after he was forced to miss his entire rookie season due to a shoulder injury. However, due to a Lisfranc injury suffered during a training camp practice a few weeks ago, Golson now appears headed for yet another medical redshirt year. With Golson out of action, the Steelers were forced to start working rookie second-round draft pick Sean Davis at the starting nickel cornerback position in addition to developing as a backup strong safety. As a result of that, the Maryland product appears to be destined for quite a bit of playing time during his rookie season as part of the team’s sub package defense and his quick development is imperative.

Not much to see from the young outsiders – Training camp at Saint Vincent College came to a close with young outside linebackers Jarvis Jones and Bud Dupree forced to work on the side because of minor injuries and it’s looking like both will miss yet another preseason game Thursday night as a result. For a team reportedly wanting both of these young players to absorb a bulk of the playing time in 2016, the lack of practice time each had while at Latrobe is a bit concerning. Last season, the Steelers outside linebacker corps only recorded 15 total sacks with several of those coming late in big wins. Those numbers, along with quarterback pressures in situations where the defense only rushes four players must improve in 2016 and both Jones and Dupree are expected to play a role in that. Hopefully they can get themselves on the field for some tune-up action very soon.

The Bell appeal toll has yet to be heard – It was widely believed that Steelers running back Le’Veon Bell would have the appeal of his four-game suspension heard by the time the team takes the field for their second preseason game against the Philadelphia Eagles. However, as of Tuesday, Bell apparently doesn’t have an appeal date set. Currently, the Steelers seem to be preparing as if Bell might not be ready available to them for the start of the season and that has warranted them taking long looks at Fitzgerald Toussaint and Darly Richardson as potential backups to possible Week One starter DeAngelo Williams. Bell was reportedly originally suspended this past March so hopefully the team will find out his future availability in the coming days.