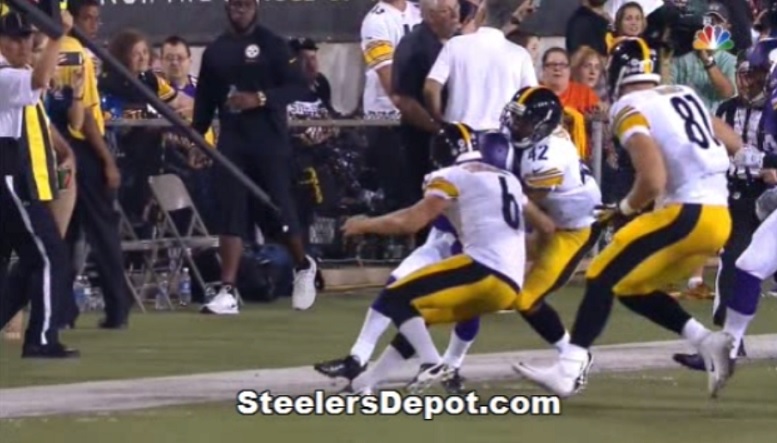 On Saturday, the Pro Football Hall of Fame highlighted one of its great evenings with some excellent speeches from the greats who played or shaped the game, including from one of the game’s all-time great quarterbacks, who brought it all home with an emotional and from-the-hip marathon of reminiscences.

Yesterday, however, was a very different sort of day, and one that should have been full of football rather than controversy, as the organization and the NFL had no choice but to cancel the Hall of Fame Game that should kicked off the year of ‘real football’ between the Colts and the Packers.

The reason was due to the conditions of the field being too poor to ignore in the name of player safety, as, reportedly, the wrong sort of paint was used on the field that caused it to harden in some spots like concrete, which would not allow the spikes of a cleat to penetrate its thickness.

For a couple of members of the Pittsburgh Steelers, past and present, and for their teammates, it was too little, too late, as the team saw two of their players last season go down to significant knee injuries while playing on the same field, and many voice concerns about the condition of the playing surface both before, and certainly after, the game.

In fact, that put the team in quite a bind, as it ended the season of their kicker, Shaun Suisham—and we later learned that it likely ended his career, as well. The Steelers spent the next couple of months scrambling for a kicker, even trading for one and then cutting him during the regular season.

Running back Cameron Stingily also suffered a vicious hit during the game that was exacerbated by the field conditions, forcing his body to be wrenched awkwardly backward. At least for the young man, it did not end his career. He is on the team’s 90-man roster again after, once again, winning a roster spot as a tryout player.

While the league cites safety concerns, it is fair to wonder where such concerns were last year. The porr conditions of Tom Benson Stadium at the Pro Football Hall of Fame have been known for years now, and many regard it as hardly fit to host a football game. That proved true both in theory and practice last night.

Former Colts tight end Jacob Tamme posted on Twitter last night that Suisham’s plight and subsequent advocacy may have played a role in the decision to cancel the game, writing, “Shaun’s work and advocacy [were a] big part of this decision. Took NFL to task over the situation and now player safety wins”.

The NFL should think long and hard over the course of the next year about the future of the Hall of Fame Game, and whether it needs to be held at all. Should they be set on continuing to play the game, which is no doubt the case, it is imperative that they find a more suitable venue, or significantly renovate the current one.