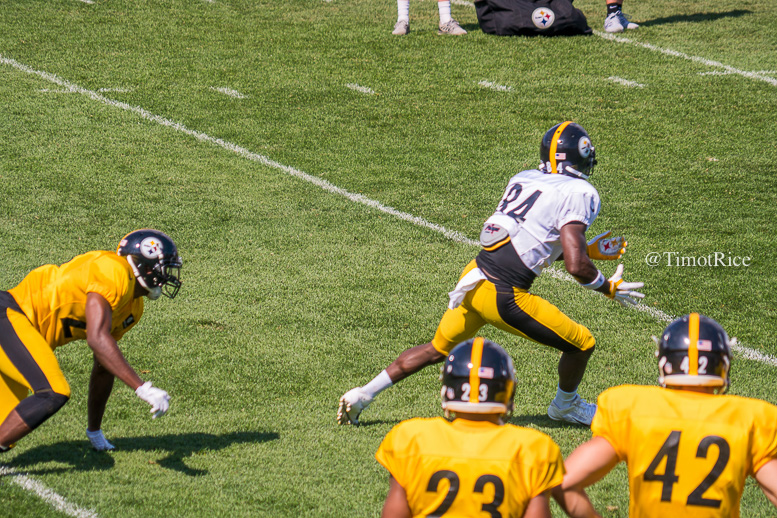 If iron indeed makes iron sharp like Pittsburgh Steelers head coach Mike Tomlin has always said, then rookie cornerback Artie Burns should be slowly developing a razor-fine edge to his game over the course of the next several weeks at Saint Vincent College in Latrobe.

Burns, the Steelers first-round draft pick this year, has had quite the welcome to the NFL as part of his development will include him having to cover wide receiver Antonio Brown, who is currently tops in the league at his position. Sunday, Burns talked about what he’s trying to accomplish when asked to cover Brown during the team’s first few training camp practices of 2016.

“He’s the best in the league and I just like to read him out and see what he likes to do, how he tries to get into position and make a play on the ball and stuff like that,” Burns said.

While Burns is likely to lose a majority of his one-on-one battles with Brown, he certainly understands that he should be attempting to gain knowledge for future matchups on each and every play.

“Of course you want to win every time, but I just use that as a learning block,” the Miami product said. “However he beat me, I try to find out how I can make a better movement, or better positioning, to make a play on the ball.”

Burns’ learning doesn’t just stop after the play is over, however, as he admitted that he likes to talk to Brown after practice is over in an effort to pick the wide receiver’s brain.

“Most definitely,” said Burns. “I want to see what he saw, how he tried to attack me and stuff like that. Makes me see things differently. Most definitely helps me get better and especially from OTAs when I first went up against him until now. I’m just going to keep learning and just keep getting a feel of the game better.

You can see below what Burns is having to deal with during training camp when it comes to him attempting to cover Brown. While there’s sure to be more plays like this during training camp, Burns can rest easy knowing that he’ll unlikely ever be asked to cover anyone better than Brown during a game.

Brown is the sharpest piece of iron in the league and hopefully Burns will become just as sharp thanks to all of the opportunities he’ll have to rub up against him over the course of the next several years.