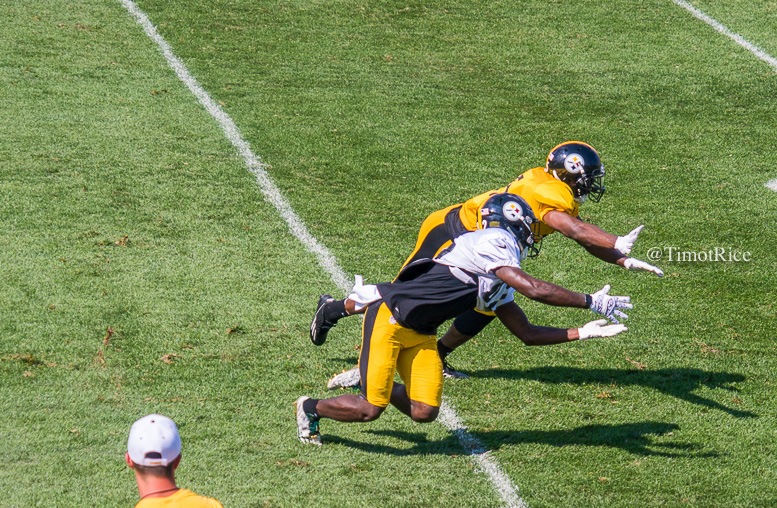 You know exactly how I feel about Antonio Brown and punt returns. He should be the starter, no questions asked. It’s what AB wants, it’s what Danny Smith wants. But if we don’t get what we want, there’s a true battle on hand. Eli Rogers squaring off with Demarcus Ayers.

We’ve talked a good bit about them throughout the first five days in camp. Both have flashed though it’s obvious Rogers is ahead of him. But like almost any other situation, these stories will really unfold in stadiums. Not Chuck Noll Field.

For the offense and defense, you can glean something in team drills. They may all be teammates, but once the ball is snapped, all that is forgotten. This camp has been aggressive, spirited, with big hits shared around.

Special teams? You’re just not going to come close to the level of intensity you’ll experience in a game. On returns in camp, there’s no tackling. The coverage unit wears red and green caps. Danny Smith is there to coach them up as soon as the play ends.

So even when a guy like Rogers looks “good” and earned praise from Mike Tomlin in camp, it means very little. Judging these players will require watching them throughout the four preseason games. To be put on an island, on the field all by themselves, with 50,000 opposing fans breathing down their neck. Not 4,000 Steelers’ fans at St. Vincent College. It’s just impossible to come close to recreating that environment anywhere else.

All that said, the story we wrote can change in an instant. Sure, maybe Rogers proves he is the guy, at least, over Ayers. But all it takes is one muffed return from Rogers – who still hasn’t played in an NFL game – and one solid return from Ayers, and we’re all talking about a drastically different battle. Or at least, storyline.

Who knows how it’ll play out. It’ll be fun to watch, both are talented guys and have shown glimpses of it, but it’s important to remember the context, especially in a battle like this.

Also, Antonio Brown should really be the team’s starting punt returner. Sorry, I had to.