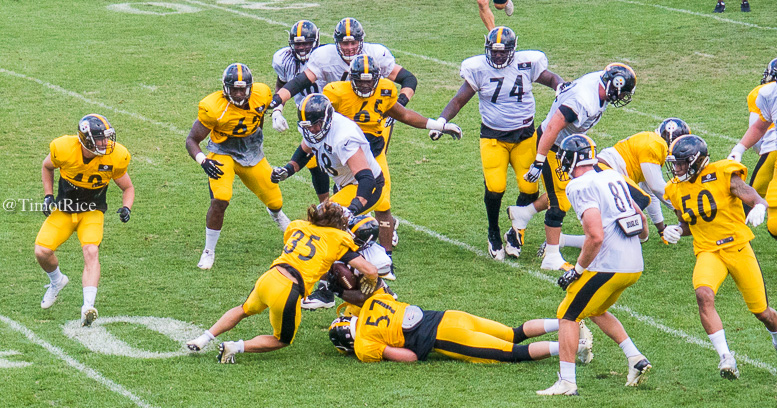 The good people over at Pro Football Focus are expanding their horizons each year, though it doesn’t seem to bring them any more love among large swaths of those who follow the game. They have implemented many new features over the past couple of years, and this year, they have grown enough to have the opportunity to visit teams’ training camps and provide first-hand accounts.

The PFF crew was recently at the Pittsburgh Steelers’ training camp, watching them on the fields of Latrobe at St. Vincent College, and they came away impressed, but one observation in particular stuck out to me.

In an article recapping their experiences at Steelers training camp published yesterday, one of the keys that the PFF team focused on was their impressions of the physicality that they witnessed during the practice sessions, which they wrote distinguished itself from that of other training camps that they have been attending.

That is not, of course, without good reason. The Steelers are one of few teams—maybe even the only team, I’m not entirely sure—that regularly incorporates full live-tackling sessions of 11-on-11 scrimmages, and it should go without saying that that adds a great deal of physicality to the proceedings.

Their backs-on-backers drill is also not something that is featured in every training camp, as DeAngelo Williams found out when he joined the Steelers last season, this in spite of the fact that he is a very good pass protector from the running back position.

“Pittsburgh’s physicality in camp is impressive compared to other teams this year”, the article reads, “and that proved true again on Sunday, with some big hits coming from multiple players on the defense. Linebacker Ryan Shazier seemed particularly pumped to be let off the leash for the first time this offseason, and was flying around both individual and team drills like a guided missile to deliver some big hits”.

As the quote notes, the physicality has come from virtually every aspect of practice, from the scrimmage sessions to the one-on-one drills. Steelers linebacker Vince Williams even called the first day of practice in pads a holiday.

“All in all, this is one of the most physically-intense team practices you will see”, the article reads, “and that is likely a big part of the team’s consistent success, despite at times fielding personnel that doesn’t look like it should be as successful as it is”.

The latter is a fair point, as the Steelers’ success in the mid-2000s rested quite a bit on their overpoweringly physical defense. While there were many factors involved, their decline in the 2010s coincided with a curtailing of physicality with an expansion of protections for defenseless players that they have had to adjust to.

The defense has at times been bogged down by some tackling woes, but their two biggest culprits in that department from last season are gone, and the hope is that that corner has been turned. The defense is on the rise and looking to re-establish itself as a top unit in the league, and one that will punch you square in the jaw.