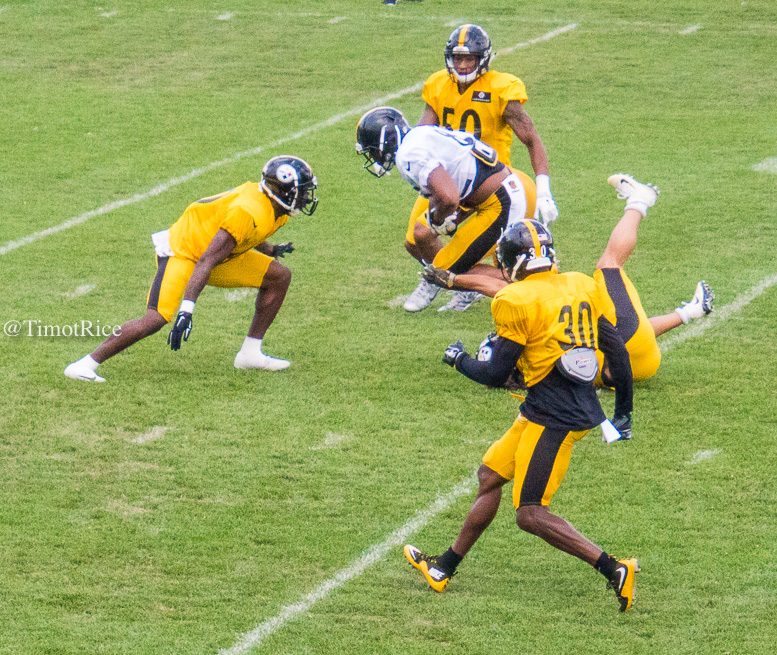 As I mentioned here yesterday, the Steelers have a number of names on the bottom of the cornerback depth chart that are more likely than not to be represented, at this point, on the 53-man roster when all is said and done.

Following the injury to Senquez Golson, which may well end his season—though it has yet to be determined whether or not his foot injury will require surgery—the Steelers only have four cornerbacks on their 90-man roster that can be accounted as their own draft picks, and none of the rest are made up of free agent signings.

All the others on the roster are Reserve/Future signings or tryout players, the latter in the place of Donald Washington, who recently turned 30. Of course, he is no ordinary tryout player. Unlike the vast majority of players in such a situation, Washington had already had an NFL background.

A former starting cornerback for the Buckeyes in college, he ran into some issues that led to team violations and a suspension, but wound up as a fourth-round draft pick in 2009 by the Chiefs. Kansas City, however, moved him from cornerback to safety, and he started five games there in 2010 and 2011.

He didn’t make the team the following year, however, and then ended up spending some time out of the game before bringing his talents to the Canadian Football League. He seemed to revive himself a big last year before his season was ended prematurely by injury.

Now he hopes to reignite his NFL dreams with the Steelers, back at the cornerback position as a 30-year-old man. He may not be quite as spry as he once was, but the truth is that he had plenty of athleticism in reserve, posting a 4.49 40-yard dash, a 6.84 3-cone time, and a 45-inch vertical, the latter being particularly impressive.

Washington is by far one of the most experienced cornerbacks on the roster, which, of course, says as much about the rest of the group as it does him. But no matter the circumstances that make that a true statement, it does give him at least that edge as he looks to make his first NFL roster in five years.