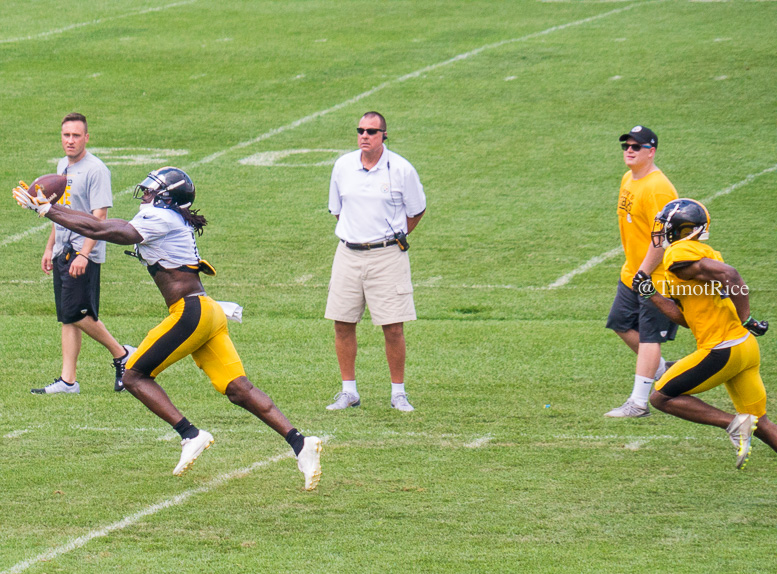 With the start of the 2016 regular season quickly approaching, it’s hard not to be excited about Pittsburgh Steelers second-year wide receiver Sammie Coates as the Auburn product and former third-round draft pick figures to have a much bigger role in the offense this year as the team looks to overcome the loss of suspended wide receiver Martavis Bryant. While training camp practice reports about Coates are certainly great to read when it comes to the young wide receiver, hearing what his position coach thinks about him is even better.

Richard Mann is no stranger to working with and developing young wide receivers and a few days ago he talked about Coates during his session with the media at Saint Vincent College in Latrobe.

“Well, he’s hungry now,” said Mann of Coates during his media session that was aired on Steelers Nation Radio. “See, what happened was, we had to throw him to the wolves at the end of the season last year up there in Denver and he did good, he did a good job. A very adequate job, I should say, and he got a taste of it and now he’s hungry. So with that said, he’ll be much better than he was then and we just told him he’s got to pick up where he left off in Denver and that’s basically what I’ve seen so far.”

In that Divisional Round playoff game last season against the Denver Broncos, Coates was indeed thrown into the deep end of the pool as he had to play quite a bit due to fellow wide receiver Antonio Brown missing that contest due to a concussion. While not a focal point in that game, Coates did have two catches for 61 yards and both resulted in explosive plays for the offense and in total he played 25 offensive snaps.

Coates, who learned all about what proper conditioning is at the NFL level as a rookie, is in much better shape this year as he dedicated himself to improving it during the offseason. Mann, however, knows that he’s still an unfinished product and he talked about what the next step is for him in year-two.

Mann was asked how Coates looks different this year.

“I mean you watch him, he don’t look nothing like he looked last year,” Mann said. “Last year he was a rookie, didn’t know the offense, didn’t know the concepts that we were teaching that well, because he had been hurt when he first got here and never really practiced. This year he had a great offseason, I think, and to me, you get out of it what you put into it. He’s put a lot of work in in the offseason and hopefully it’s going to pay off for us.”

With the future of Bryant still very much in the air right now, and fellow wide receiver Markus Wheaton entering the final year of his rookie contract, Coates has a great opportunity to establish himself as the team’s future No. 2 wide receiver this year. He’ll be used early and often in the offense this season as he and veteran wide receiver Darrius Heyward-Bey figure to platoon in three wide receiver sets throughout the season. At some point during the season, one would hope that Coates’ playing time will steadily increase and he could ultimately wind up supplanting Wheaton as a starter as well. Rest assured, Mann will be in Coates’ ear all season pushing him to get better.

“I think he’s got talent, I just got to get it out of him,” Mann said.