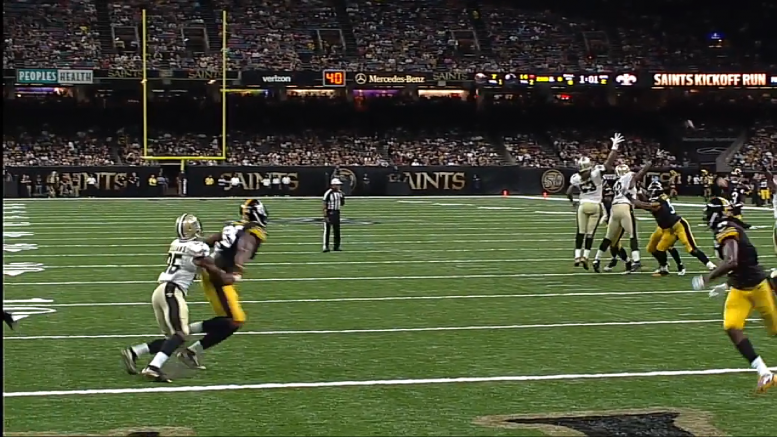 Fourth-year Pittsburgh Steelers quarterback Landry Jones came under heavy fire last week following a four-interception performance against the Eagles in the first half of the team’s second preseason game. In spite of the fact that a number of his interceptions came with mitigating factors—hit as he threw one, another bounced off his target and was picked off a deflection—the stat line was too much to bear for some, who urged that he be released immediately, even though he was the only healthy backup now who has been on the team for more than a week.

Of course, there was never any risk of that happening, as any reasonable person should have anticipated. Nevertheless, it was hoped from all corners that Jones would play a much better game the next time around, and he was fortunate to have been put in a good position to do so with the first-team offense.

Because Ben Roethlisberger’s time in the game had been so prolific—he marshalled the first-team offense for two drives, both of which ended in touchdowns—the veteran’s day ended early, and Jones was able to play for the rest of the first half, and into the second half.

His first drive came in the waning minutes of the first quarter, and was highlighted by a beautiful sideline toss to Markus Wheaton for a 36-yard gain that brought the ball to the Saints’ 22-yard line. Unfortunately, a holding penalty set the drive back thereafter, and what should have at least yielded a field goal resulted in no points after Le’Veon Bell lost a fumble at the 22-yard line.

Jones’ second drive culminated in a three-and-out when his third-down pass attempt was batted down at the line of scrimmage by the encroaching interior pressure, but he led the offense, now with second-team personnel in the game, on a touchdown drive to close out the Steelers’ offensive portion of the first half.

He was able to connect with tight end Xavier Grimble for an explosive play down the field on an initial third-and-one play, then converted a third-and-long on a connection with Bell, who was surprisingly still being mixed into the game.

He converted another third down, this time with six yards to go, on a connection to Bell, and then two plays later connected with Sammie Coates in the back of the end zone for the eight-yard touchdown, his first points since the first preseason game.

Jones still controlled the offense for three most drives in the second half, leading to a field goal on one occasion on the strength of a 58-yard bomb to Coates. The struggles of the running game were a constant impediment to offensive movement after the first quarter.

In all, Jones completed 19 of 22 passes, with one incompletion being a throwaway, and I believe another was dropped. He gained 206 yards through the air, averaging 9.4 yards per pass attempt, and of course also had the touchdown pass. He had taken just one sack in 64 dropbacks thus far.