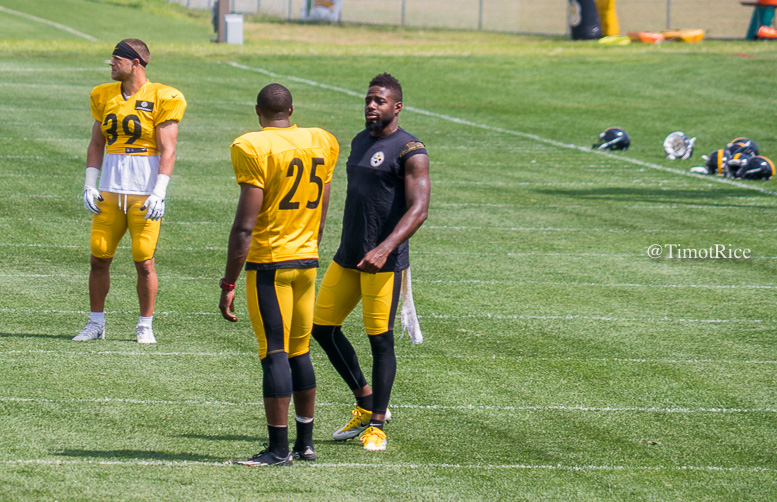 We’re splitting up what to look for in the preseason opener against the Detroit Lions. My main focus will be on the rookies to watch for and there are plenty of them to focus on. We’ll also look at some “big picture” takeaways that will be paramount, too.

1. Demarcus Ayers – The first question is how much play time he’ll get. There will be snaps, no question about it, but with the Steelers getting a long look at Eli Rogers, Ayers will have to bide his time for work in the slot. He also is unlikely to get first crack in the punt return game, serving as Rogers’ understudy in every facet. Again, the chances will exist, but with backups and it being later in the game when things start getting even sloppier than usual.

But because he’s in the slot and generally has a shorter route tree, the throws are easier and the completion rate obviously higher. I’m curious to watch him in scramble drills and how he responds to them. It might not be Ben Roethlisberger back there but in these games, the quarterback is always under siege. And the Steelers’ backups have just enough mobility to extend the play. Ayers needs to keep working hard and create his own luck.

2. Jerald Hawkins – If he can play, and that seems like a big if as of this writing. I’m really hopeful that he will get to suit up because he’s had an overall impressive camp. The Lions’ pass rush is fierce top to bottom and it’d be a good test for the rookie. I really want to get a good look at his pass protection and see what his strengths and warts are. One-on-one tells you some things but it clearly doesn’t replicate what happens in a stadium.

As I’ll mention in my big picture perspective, stunt pickup is going to be a huge key for this offensive line. Detroit toasted the Steelers on the first day with their “games,” though I don’t have a specific evaluation for how well Hawkins handled them.

1. Sean Davis – There’s been a lot of talk about him and unfortunately, he’s another rookie we have to qualify with “if” he plays. He’s been bothered by a knee injury and though I’m more hopeful with him than most of the others, I’m far from certain on his status.

For as much fanfare as we have with Davis, he hasn’t exactly lit up camp. He hasn’t been bad, mind you, and has made his presence known against the run a few times early on, but there isn’t a single play that I can point to in coverage that has stuck out in a glowing way.

Expect him to see time in the slot and at safety while playing special teams (will he work as the right wing on punts?). That will test conditioning that has been praised by Mike Tomlin during camp. I would love to get a couple snaps of Davis on Anquan Boldin, just to see how the rookie will respond.

2. Javon Hargrave – The big guy’s gotta eat! All the hype, all the impressive camp play. It could be extinguished if he doesn’t show up tonight. I want to see him get nickel snaps, get to work as a pass rusher, and run after the ball sideline to sideline and downfield.

If he is anything like what he’s done in camp, Steelers’ Nation is going to get pretty jacked.

3. Tyler Matakevich – Dirty Red, the one fans seem to be mobbing each other to praise. Practices have been good but let’s see if he can live up to the hype of being a tackle machine in the preseason. And if he can make Bob Pompeani and Charlie Batch swoon inbetween local ads for Uncle Charley’s sausages.

I’m just as excited to see him as a special teamer and want to try and see how he works off blocks. The cardinal sin on the coverage unit is to get stuck on your man.

To play well in this league, you have to play fast. And to play fast, you have to be able to read your keys and not get caught up in the window dressing the NFL is going to throw at you. You might assume Matakevich will be able to handle that and hey, maybe he will, but most rookies face their fair share of issues.

As exciting as it is for football to be back, this games aren’t always pretty to watch. If you want good, clean fundamentals, you may want to give it a few weeks. Anyone who checked out yesterday’s slew of games know what happened. Sacks, fumbles, blocked punt, muffed returns, all the stuff coaches despise. The Steelers aren’t going to be perfect, I think there will be many, many sacks, but limiting it as much as possible is the goal.

And I hope these rookies can play. The Steelers will most certainly be without two – Travis Feeney and Artie Burns – while two others – Davis and Hawkins – could miss. That leaves just three draft picks to log snaps.

Anyway, onto the focal points for those who play.

It’s what Tomlin preached. The return men and running backs have to take care of the football. No wiggle room, no margin for error when you have a host of players itching to take your reps.

Bouncing off that, there’s prime chances to make plays on special teams. And screw up. It’s the least repped thing in camp so it’s where you get sloppy play. Take advantage of the coverage guy cluelessly out of his lane or the wing on field goals who is late off the ball. Just ask Roosevelt Nix how far special teams can take you.

The offensive line has to play with active eyes, recognize some basic tells for stunts and blitzes (different stance, stagger, alignment), and be prepared for some of the T/E twists the Lions will throw at them.

The receivers have to be ready to run “hot” against pressure. To know where the sticks are, run the correct depth, not drifting away out of their breaks and working back to the football underneath. That all sounds simple but to a rookie or young guy, it’s a lot to process while trying to play fast and get noticed.

The defensive line has to play gap sound, both in run and pass. Nothing worse than one pass rusher losing contain and letting a play extend when it should’ve gone for a sack or throwaway. The devil is in the details.

Linebackers have to read their keys and not fall for window dressing. Low hat on playaction, false keys of the guard, fake end arounds. They have to keep their feet moving, especially against the zone. Feet in concrete will get you out of your gap and allow big gains.

Defensive backs have to understand basic route concepts and where routes break off. No one wants to get burned on a double-move on national television.

And basically everyone has to be able to contribute on special teams, playing at the same level and intensity as they do on their side of the ball. This tests conditioning to their core, with all the adrenaline the first game naturally brings. Let’s see what guy bows out with cramps or is noticeably gassed on the field, hands on hips, and puts bad tape out there. I don’t know which is worse.

Not to get too overly excited camp counselor on you but it’s also important to have fun. It’s a game, for many their first, and an honest-to-goodness dream come true. Playing uptight and nervous is going to show on the field. Play loose, play fast, play physical, play smart. And you’ll have a strong outing.