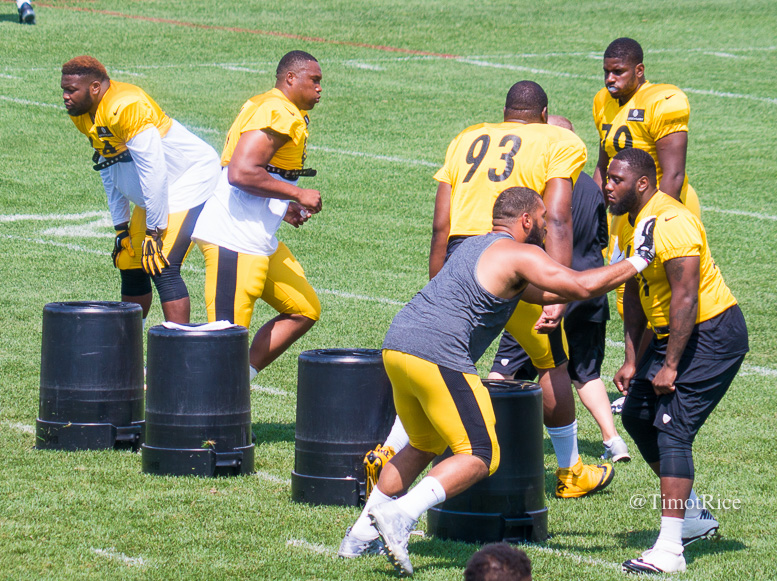 That was how Pittsburgh Steelers sixth-year defensive end Cameron Heyward began to answer a question posed to him yesterday during an interview aired on Steelers Nation Radio about their third-year nose tackle, Daniel McCullers.

It seemed like a fitting way to begin answering a question about a player around whom there has been so much discussion and speculation and enthusiasm, conversations about potential and hope, all of which has yet to be seen, but which they are hoping to see now, with a spot open in the starting lineup.

McCullers, a 2014 sixth-round draft pick, was selected by the Steelers primarily due simply to his size, a 6’7”, 350-pounds-on-a-good-day behemoth whose college tape was fairly unimpressive for a man of his frame.

“Dan’s such a big guy, and you see the tools that he has, and you see how dominant he could be”, Heyward said of McCullers as he contemplated the question posed to him. He was quick to add, however, “but I don’t like hearing ‘could’, because that’s just potential”.

The Steelers don’t have the luxury to rest on potential in 2016 after starting nose tackle Steve McLendon left in free agency. If McCullers is not prepared to take over the nose tackle position, then it will have to fall to rookie third-round pick Javon Hargrave, whose promising start to training camp should be all the motivation McCullers needs.

“Dan’s really got to take the next step”, the leader of the defensive line said. “This is a big year for him, and we’re gonna give him every opportunity”. The Steelers are not quick to rely on rookies on the defensive side of the ball, which is where Hargrave finds himself now, though one of his draft classmates may have no choice but to play in the slot.

“It’s just about him finally settling down the position”, Heyward said of McCullers and the prospect of him being featured as the defense’s nose tackle, even if the role is no longer when it once was, relegated to a few hundred snaps a season.

Perhaps the Steelers and the coaching staff have seen a flash of dominance here and there, when McCullers summons his sheer girth and strength to drive an offensive lineman seven yards into the backfield with a seemingly effortless display, but such moments have been too few and far between, particularly in his limited playing time.

With Hargrave breathing down his neck, the time is now for the third-year behemoth to play up to his size and command the position that he was drafted to fill, even if his journey may have begun as simply a flyer on a “size prospect”, as he was referred to after he was first drafted.