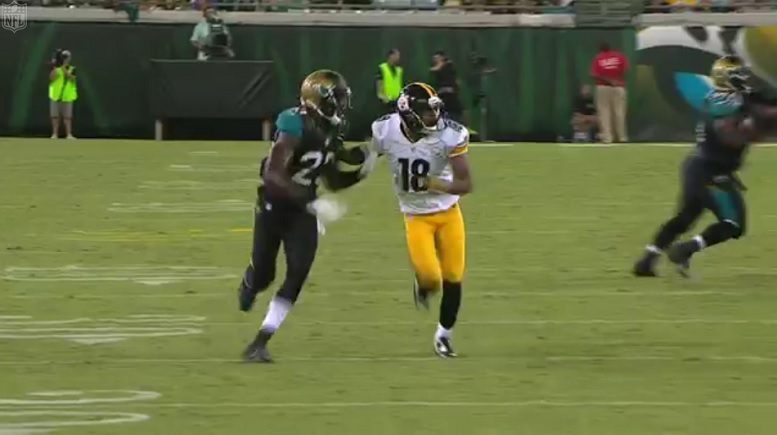 Do any of you remember C.J. Goodwin? He was the young undrafted wide receiver the Pittsburgh Steelers had for a few training camps recently. Well, it appears as though Goodwin is having some success now with the Atlanta Falcons this offseason after being asked to switch to cornerback.

Goodwin reportedly got plenty of reps at cornerback with the Falcons first-team defense Friday night with starter Desmond Trufant sidelined by a hip injury and he took advantage of the opportunity by picking off quarterback Matt Schaub in the end zone during practice. The California (PA) product, who stands at 6-foot-3, has reportedly earned praise from the Falcons coaching staff for his play and should be an interesting project for the team moving forward.

“We know that Goodwin has the ball skills, and we’re anxious to see him into this preseason,” said Falcons head coach Dan Quinn. “He’s got length, he’s got speed, so he’s got some of the prerequisites. He does not look out of place playing defensive back.”

Goodwin, if you remember, was recommended to the Steelers by Hall of Fame cornerback Mel Blount. After spending his entire rookie 2014 season on the Steelers practice squad as a wide receiver, Goodwin signed a futures contract with the Steelers in January of 2015. After spending last year’s training camp with the Steelers, Goodwin played in the team’s first two preseason games, however, an injury suffered in that second preseason game resulted in him missing out on practice and playing time and he was eventually waived at the end of August.

The Falcons initially signed Goodwin to their practice squad late during the 2015 season and then signed him to a futures contract this past January. His position switch evidently began late last season at the urging of Falcons defensive backs coach Marquand Manuel.

“I just started playing receiver so why not try to play DB?” Goodwin said this past June, according to Vaughn McClure of ESPN.com. “We’re going to see how far it goes.”

How crazy would it be if Goodwin winds up making the Falcons 53-man roster this year? To think the Steelers had a capable cornerback under their noses for quite a while is quite frustrating, right?

While it’s still relatively early to know what the future ultimately holds for Goodwin as a cornerback in the NFL, his situation is certainly worth paying attention to as the start of the preseason draws closer.