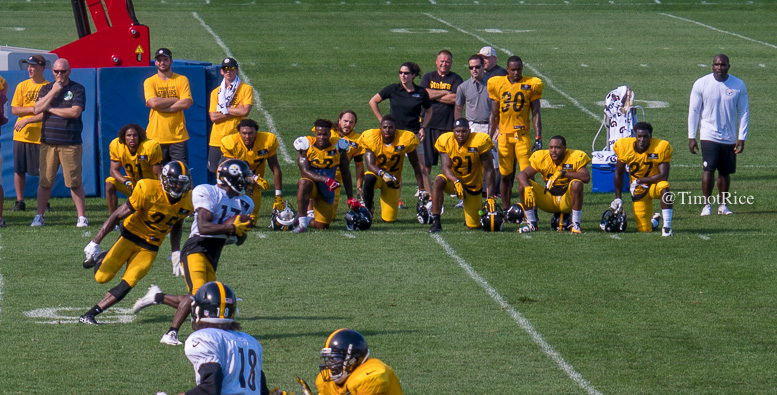 Second-year Pittsburgh Steelers wide receiver Eli Rogers already seems to be a roster lock, at least if you gauge the pulse of the team’s fan base, anyway. That is certainly saying something when you consider the fact that he has hardly even had a practice with pads on, let alone participated in a preseason game. As is often said, ‘wait until the pads come on’, and Rogers has only had a small handful of padded practices under his belt.

That really may not be much more than is required, if truth be told, in part simply due to the fact that there is an opening for the fifth wide receiver slot and no other glaringly obvious candidate that needs to be on the roster in his place, and in part because of what he has already shown up until this point.

While I admit that I haven’t had the opportunity to see if for myself just yet, outside of some brief clips of training camp practices, a variety of reports paint a picture of Rogers as a highly polished route runner who may be second only to Antonio Brown on the team in that regard, which is a high accolade.

Rogers continued to impress with his route-running ability yesterday in the Steelers’ joint practice with the Lions, competing against those who are not his teammates, which is, thus far, the next best thing to actually watching him compete against other players in a game setting.

But the level of separation that he is able to create for himself with his footwork, quickness, and crispness in his route is what will be getting him onto an NFL roster, or so it appears, a year after injuring his foot before the Steelers even reached a preseason game in training camp in 2015.

Ed Bouchette in a recent chat even went so far as to suggest that Rogers could be the team’s starting slot receiver as early as the season opener, though it is difficult to gauge the level of sincerity of the remark. But the suggestion is not ill-fitting with what we have been hearing of him for the past year.

Still, the fact does remain that he has yet to play in a game, and that is not to diminish the significance of the skills that he has already shown in practice, skills that strongly correlate to a successful translation onto the football field.

Much has been made about his future already before it has even been guaranteed. Many players have shined in training camp practices, only to fade in games—including a few wide receivers in recent years that I can think of—and there are many who have been just the opposite.

Rogers may well be everything that he looks to be on the practice field, and I will not bet against that, but I am eagerly anticipating the long-awaited opportunity to actually see him run a route and catch a pass in the settings of an NFL game.