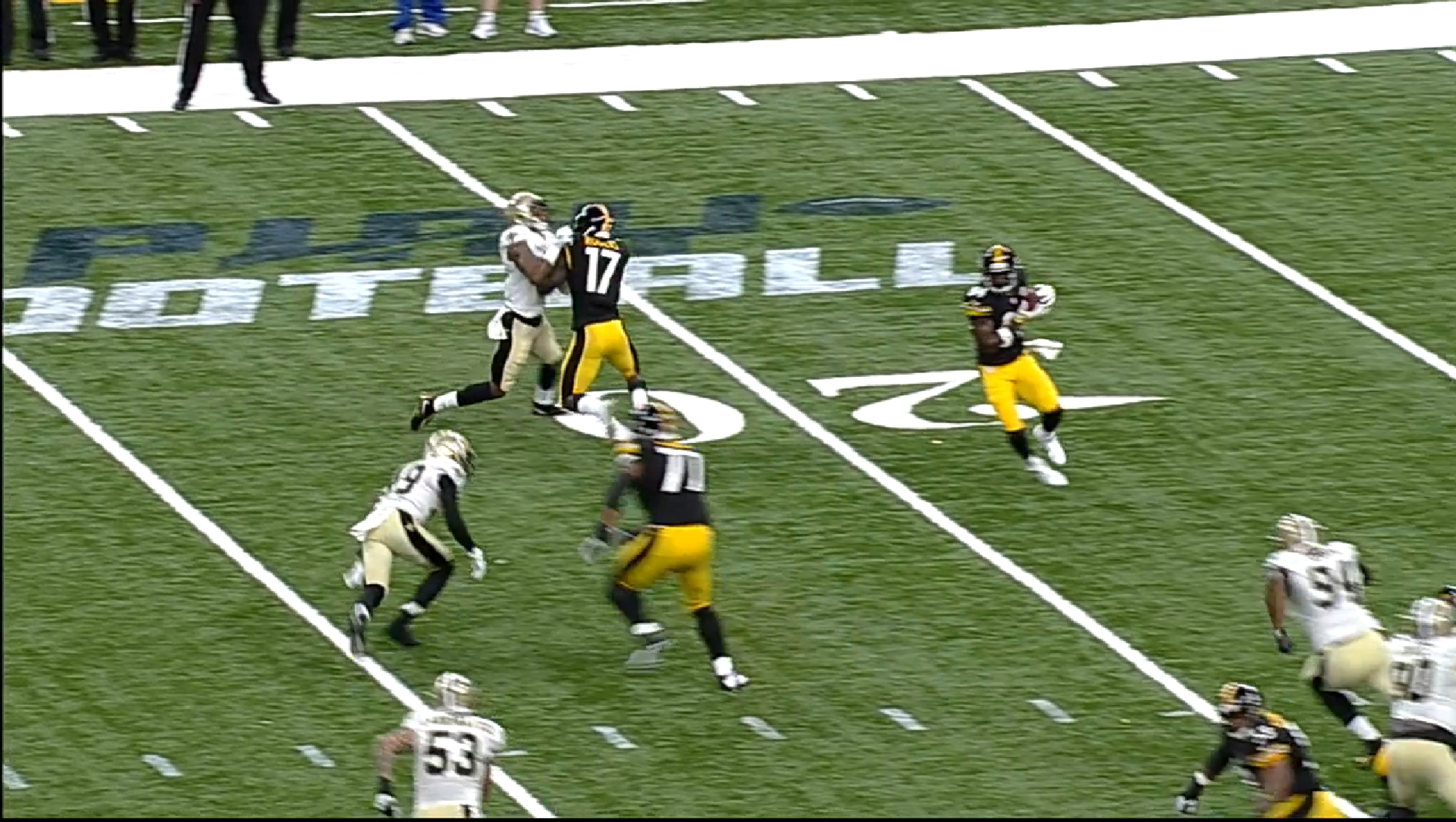 A short while after the Pittsburgh Steelers’ last preseason game against the Eagles, I noted that the team’s usage of the 11 personnel in the third preseason game was going to be something to monitor. In particular, of course, I was interested in tracking the personnel on hand that was used with the first-team offense.

I was interested specifically in who would receive the bulk of the work as the third wide receiver with Ben Roethlisberger in the game, and we didn’t have to wait long to get a fairly definitive answer. Though the offense opened in a 12 set with two tight ends, they moved to the 11 on second down, and in came Eli Rogers, checking into the slot.

He stayed in for nearly the rest of the time over the course of the first two drives, in fact, as the Steelers executed their no-huddle offense, which they run primarily with three receivers on the field, for fairly obvious reasons.

His first target came on the sixth play of the game, but the pass fell incomplete on a vertical route on a second-and-10 play. Roethlisberger came back to Rogers on third down, where he sat down and made the reception, able to stretch over for the first down just at the sticks.

His third target of the drive came on second and goal from the five-yard line. Near the goal line, from the right slot, he broke sharply toward the sideline, but the coverage was on point, and Roethlisberger was forced to throw the ball wide.

Of the Steelers’ 15 plays that constituted their opening drive, 14—all but the first play—were run from the 11 personnel package. And on all of those 14 snaps was Rogers lined up in the slot. The wide receiver personnel did not vary on the opening drive.

Rogers was on the field again for the first three plays of the four that made up the Steelers’ second drive, but facing a third and three from their own 43, they moved to the 12 personnel again, with one tight end aligned as a receiver.

Rogers caught one pass on the drive over the middle for seven yards, another one like the week before that looked like it could break, and you know that he will break one soon. He also was a key blocker on a bubble screen pass to begin that drive.

All told, the Steelers’ first-team offense with Roethlisberger under center ran 19 plays, and 17 of them were run out of the 11 personnel, almost entirely out of the no huddle. On all 17 of those players, number 17—Eli Rogers—was the player lined up in the slot.

I will not overstate what this means for the regular season, of course. When it comes to the wide receivers outside of the top two starters, there will obviously be some diversity in usage. But the Steelers clearly like Rogers’ ability out of the slot, and he’s going to get some serious playing time if this appearance was any sort of indication whatsoever.