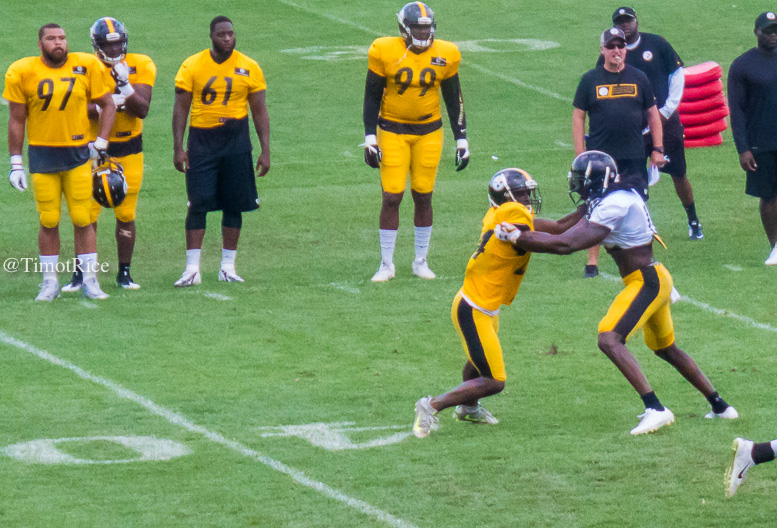 Question: Who will be active on game day for the defensive line?

Though it’s still pretty early in training camp—there has yet to be a preseason game played, of course—it seems that there is already some growing, and unsurprising, clarity about what the defensive line group will look like.

We know, of course, who the starting defensive tackles will be, and we also know that the Steelers will need at least two healthy bodies that can line up in the middle in the 3-4 and goal line defenses, so that necessitates that both Daniel McCullers and rookie Javon Hargrave spend time active.

The other two players expected to make the 53-man roster, free agent Ricardo Mathews and second-year player L.T. Walton, will be supplying depth for the defensive end position, in addition to being expected to log snaps in the nickel sub-package that features two down linemen.

Typically, however, the Steelers only activate five defensive linemen, particularly in recent years as they focus more and more on the secondary and playing in sub-packages. Last season, for example, they never had all six linemen active for a game.

The only games in which Walton was active his rookie season were the games in which another lineman was injured, and that includes early in the season for the first three games, during which they carried seven defensive linemen after claiming one off waivers following the final roster cuts.

So will the Steelers have to choose between Walton and Mathews to have one the two active on game day, or will they expect both players to contribute, and carry six active players along the defensive line on game day?

Well, the probability suggests that that greatly depends on what they show between now and September, of course. But it also has to do with special teams and other needs for a game day roster. It may come to be a week-to-week decision. But with the team talking up the desire for more of a rotation, we may see six on game day. Which is why I’ll be particularly interested to see how often Walton and Mathews are used in the preseason, and when.