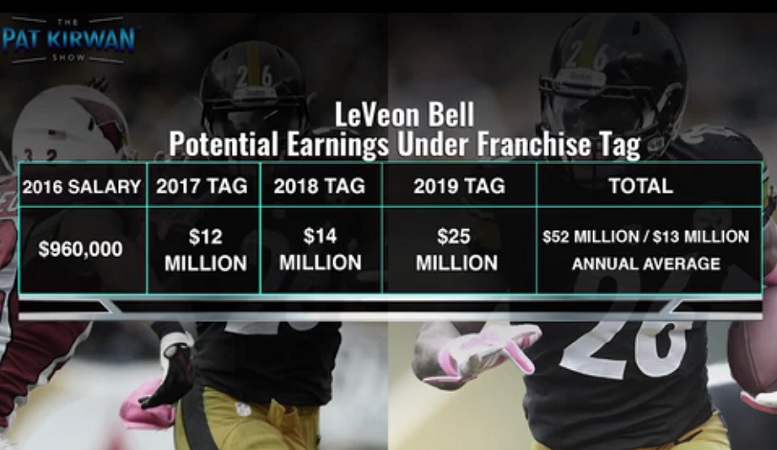 Are you already tired of talking about Pittsburgh Steelers running back Le’Veon Bell and the content of his latest rap song? If so, too bad as we are likely going to run this topic well into the ground and beyond between now and the start of training camp. Why? Because that’s what us clueless blahgers like to do in an effort to provide some content for you during the ultra-dead portion of the offseason.

For those of you who haven’t closed out this post already, Pat Kirwan of Real Football Network and show host on SiriusXM NFL Radio decided on Wednesday that it was time for him to weigh in on whether or not Bell is worth $15 million. As you can tell in the video below, he, like me, thinks that number is way too high and offers up many of the same reasons why as I have in previous posts.

“No way,” said Kirwan. “Now, he does remind me of Marcus Allen – tremendous football player, but here’s a a couple of things you got to remember. [He’s] making $960,000 this year and I’m going to add that to three years of franchise tags just so you get a sense of his value at the very, very top end. $960,000 this year, a $12 million franchise tag next year, a $14 million franchise tag the year after, and then if they had to go for a fourth one, it’s the quarterback money and make that $25 million. What you have is $52 million over four years, or a $13 million average. that’s why $15 million is ridiculous.”

So, what kind of deal does Kirwan think Bell should get and be happy with?

That sound kind of familiar? It should.

While Bell is likely to take all of these thoughts from me and other analysts as us hating on him, he really shouldn’t as it’s merely educated speculation based on the economics associated with players’ contracts.

Kirwan certainly knows what he’s talking about as he was an NFL area scout and spent eight years (1989-97) with the New York Jets, where he negotiated contracts and managed the team’s salary cap. In other words, he is much less clueless than I am.