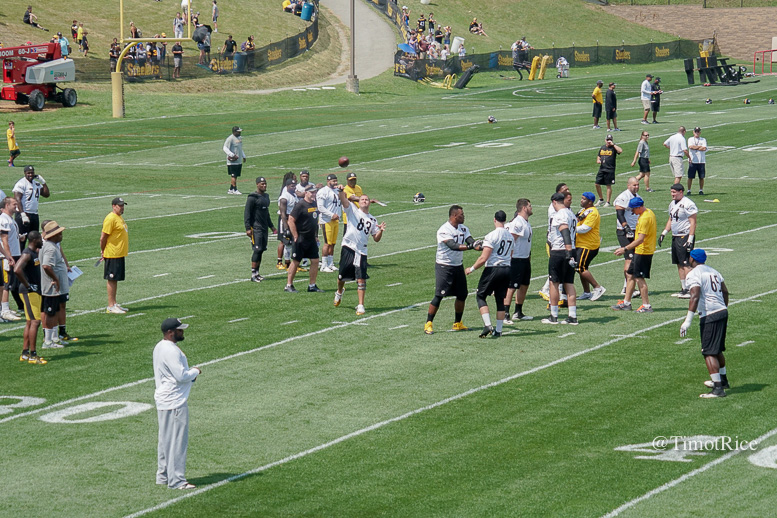 One day in the books but as the saying goes, a little bit of knowledge can be a dangerous thing. So we’re taking everything in but we’re not rushing to conclusions.

Tomorrow will be another non-contact day so I’ll again be focused on more of where the players are lining up than anything else. We learned a good bit yesterday but it’s impossible to see everything. So here are some things I’ll be paying closer attention today.

1. Bruce Gradkowski’s Reps – It really didn’t feel like he got a ton of play yesterday but maybe I just missed some of his reps. We’ll check that out and see what the split between he and Dustin Vaughan is. Vaughan didn’t have a particularly good day yesterday but it’s important for a young player to have the opportunity to rebound and show some mental toughness.

2. Third Team OL Shuffle – I looked at the offensive line on air and glanced at it during team sessions but I want to see if Jerald Hawkins is getting all the third team right tackle reps or if they’re being split up between he and Brian Mihalik. If Hawkins can prove he’s able to play at a high level while working on two teams and going through one-on-one drills, it’ll speak greatly of his conditioning. And that’s the foundation for any young player.

And if Mihalik is getting work at left and right tackle, that’s a nice feather in his cap and will place him ahead of the other guys, who are only working at one spot currently. Mihalik told me earlier this offseason that he had no preference and felt like there were things he did well on each side (more natural on left, better footwork on right).

3. Tight End Technique – Bad days for Paul Lang and Mandel Dixon, two fringe guys who are aided by the fact Ladarius Green is on the mend. But they gotta take advantage of their reps and both struggled on the sleds. They’re not going to get any stronger overnight but hopefully take some of the technique to heart. And that’s what the sled shows, technique, not strength. You don’t have to be Mr. Universe to push that sled around – you just need to stay low, explode up, shoot your arms, keep your lower half under you, and drive your feet.

Green will eventually come off PUP and that means one of these guys is getting cut. Time to shine.

4. LB Rotation – We know the obvious. Bud Dupree/Jarvis Jones first team, Arthur Moats/James Harrison second team. But I want to keep an eye on the guys behind that. Is Anthony Chickillo playing both sides? Is Travis Feeney seeing time at left and right? Got a sense for it but want to be more sure of things tomorrow.

You can apply the same for inside linebacker. I didn’t end up getting eyes on what the third team lineup was so I need to find that out tomorrow. Who is the odd man out between Steven Johnson, Tyler Matakevich, and Jordan Zumwalt?

5. Young Guys Standing Out – This is a given but for the young or unknown player, it’s important to show glimpses of what you can be. No one is going to be a finished product and while you ultimately look for consistency, I just want to see you flash. Give me the guy who wows me, even for a moment, than the dude I’m “meh” on for two weeks straight.