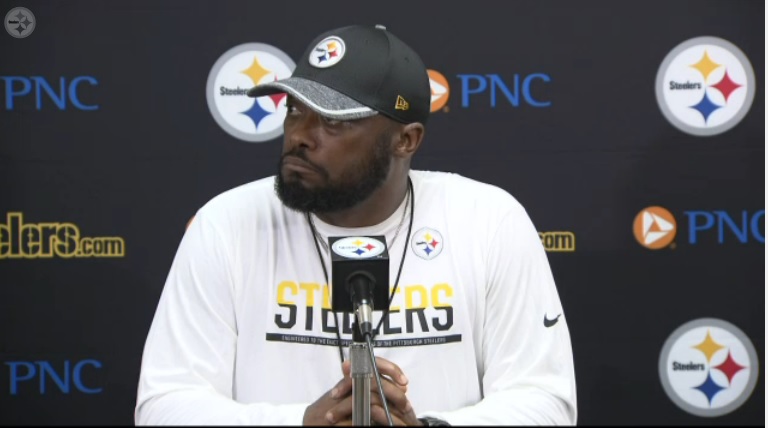 Every year when the Pittsburgh Steelers wrap up their mandatory minicamp, head coach Mike Tomlin tells his team to focus on their conditioning during the long break before the start of training camp. This year, it appears as though all but one of Tomlin’s players heeded his advice as only rookie defensive tackle Devaunte Sigler failed to pass Thursday’s conditioning test at Saint Vincent College in Latrobe.

“We just finished our conditioning test and I think the overall level of conditioning of the group is really impressive,” said Tomlin during his first training camp practice talk with the media.

While Sigler, who last season finished his college football career at Jacksonville State, was able to complete Thursday’s test, Tomlin said he was “less than highly conditioned” and later it was announced that the young player will begin training camp on the team’s non-football injury list.

“We’re going to let him get better from an overall conditioning standpoint, which is not extremely surprising when you start talking about young, big people, like young defenders like he is,” said Tomlin of Sigler. “It’s unfortunate for him, he’ll push through it. The quicker he gets back to us, the better it is for him.”

Sigler, the 2014 OVC Defensive Player of the Year, missed several contests last year due to injuries. As a result, he only recorded 20 tackles, including a sack and a pass break up, in six games played. At this year’s scouting combine, he measured in at 6-3 and weighed 298 pounds. The big man ran his 40-yard dash in 5.15 seconds and did 23 reps on the bench.

While Sigler really doesn’t have a legitimate chance at making the team’s final 53-man roster this year, he could ultimately be candidate for the 10-man practice squad if he can get himself on the field in a hurry and avoid the Turk for the next several weeks. That will be a tough task, however.

Sparingly, the Steelers only had to place two players on the Active/PUP list this year and they were tight end Ladarius Green and wide receiver Shakim Phillips. Neither comes as a huge surprise, however, as Green missed the entire offseason due to ankle surgery while Phillips has been battling a sports hernia all offseason. Even running back Le’Veon Bell was able to avoid the PUP list as he continues to put the finishing touches on rehabbing his surgically repaired knee. While he will be managed very carefully by Tomlin during training camp, at least he should be ready for the start of the regular season, assuming his four-game suspension is overturned after his August appeal is heard.

With the Steelers now set to kick off their 2016 training camp on Friday with four consecutive days of practices, we’ll find out really quick which players are very well conditioned and which ones aren’t. Football in shorts season is almost over.