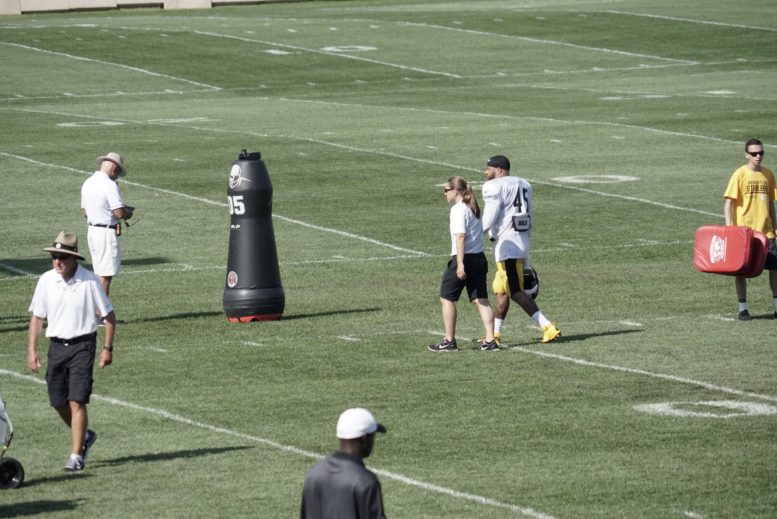 The Pittsburgh Steelers have now wrapped up their third training camp practice of 2016 and this Sunday session included the team wearing pads for the first time. After practice concluded, head coach Mike Tomlin talked to the media and gave his overarching thoughts on the day in Latrobe.

“Good day for us today,” started Tomlin. “Competing a little bit and adding some physicality to our work – competition periods, where you get an opportunity to get to know the guys under duress. Highlight of that is always back, on backers, but it’s a lot of those opportunities out there, wideouts versus DBs, O-line versus D-line. The only way that we’re going to grow and develop and be the type of group we need to be is we got to compete against one another and in doing so, we got to learn how to do it hard, but also do it professionally. I thought today was a good start, but not perfect. We’re working in that area to get better, because we realize that’s going to define us as we move forward. But not a bad start today.”

Tomlin said fullback Roosevelt Nix (undisclosed) was shaken up during Sunday’s practice and he’s being evaluated. The same goes for running back Brandon Johnson (undisclosed). Tomlin also noted that tight end Xavier Grimble (heat) had to leave practice Sunday because of heat exhaustion.

“Hopefully he’ll get back to us,” said Tomlin of Grimble.

Tomlin said that he gave quarterback Ben Roethlisberger the day off on Sunday and that it was scheduled.

EDIT: Tomlin referred to Brandon Johnson, not Steven Johnson, as the injured player. We’ve updated the article to reflect that.