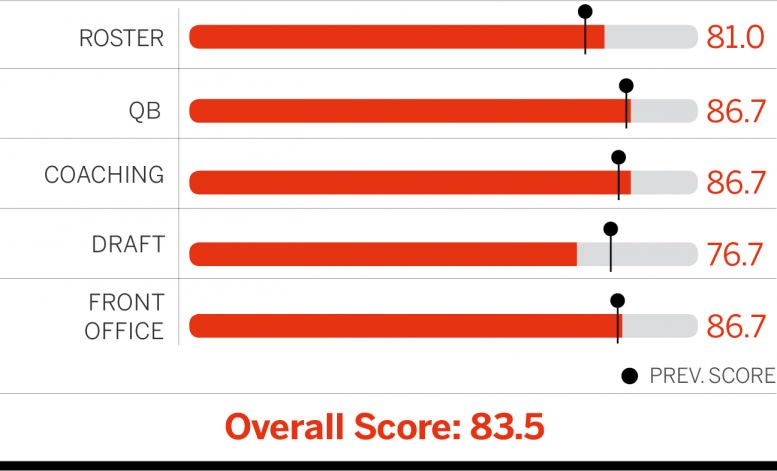 For several years now, ESPN.com has released future power rankings for all NFL teams just prior to start of training camps as part of their insider content. After being ranked fifth overall in last year’s rankings, the Pittsburgh Steelers are now ranked fourth overall this year.

This year, ESPN analysts Louis Riddick, Mike Sando and Field Yates were asked to rate each team on a scale of 0-100 in five categories: roster (excluding quarterback), quarterback, coaching, draft and front office and the Steelers received scores of 81.0, 86.7, 86.7, 76.7 and 86.7 respectively. This resulted in an overall future score of 83.5, which was good for fourth-best in the league.

Here is the summation from each of the three analysts:

High Point per Yates: The Steelers rarely make coaching changes, and Mike Tomlin is deserving of his long-standing tenure. He’s all business on the sidelines, but he has the ability to keep things light with his players while maintaining control of the locker room. Tomlin came to the Steelers with a defensive background, but he’s among the NFL’s best at managing the entire operation of his team.

Low Point per Riddick: The Steelers are one of the most consistent franchises in all of sports, so I don’t want to ding them too much here. While their past five to seven drafts haven’t been home runs, they did hit big on a few players (sixth-round WR Antonio Brown and second-round RB Le’Veon Bell) and found solid starters in LB Ryan Shazier and DE Stephon Tuitt. When looking at their 2016 draft class, I see it developing the same exact way three to four years down the road, benefiting from a coaching staff and front office that will always give draft picks a chance to succeed.

What could change per Sando: Ben Roethlisberger’s longevity is the key variable for the Steelers, who have not yet made a serious effort at lining up a successor. Roethlisberger will be 36 in 2018. He took sacks on a career-low 4.1 percent of pass plays last season, less than half of his sack rate from his first few seasons. That could help Roethlisberger hold on longer, but he still missed four games in 2015.

Being as the Steelers received an overall future score of 82.2 last year, you can see that their outlook as improved somewhat in the last 12 months. Had the three analysts felt better about the Steelers draft this year, they likely would have finished in the top three this time around.

The Steelers future success this year and beyond will obviously depend on the development of several of this year’s draft picks and most notably cornerback Artie Burns and safety Sean Davis. Both figure to see playing time during their rookie seasons. As long as quarterback Ben Roethlisberger is able to avoid injuries, there’s no reason to think the Steelers won’t be Super Bowl contenders in each of the next three seasons.

As far as the other teams in the AFC North go in this year’s future power rankings, the Cincinnati Bengals are ranked 7th overall and they’re followed by the Baltimore Ravens (10th overall) and Cleveland Browns (32nd overall).

Last year, I wrote that the Ravens could be the team in the AFC North that failed to live up to expectations and that wound up being the case. This year, however, I think the Bengals are poised for a very mediocre season.