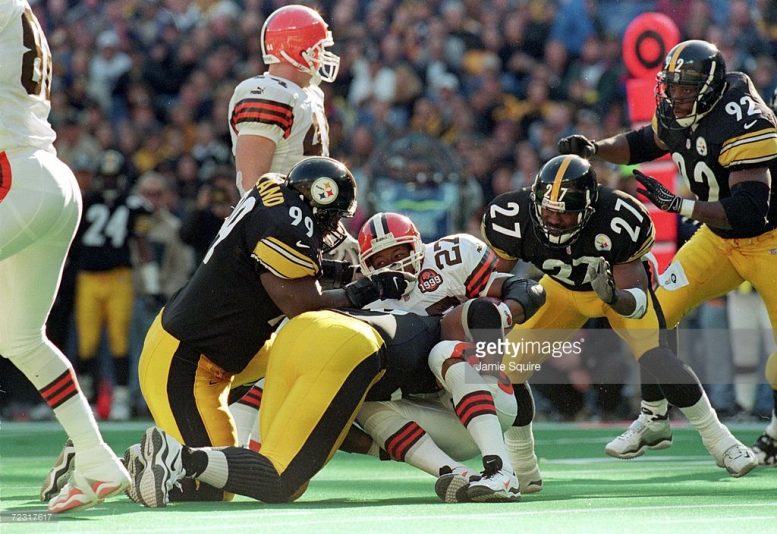 Let me begin this post by saying that I wasn’t planning on doing any more of these contract look-backs the remainder of the offseason. However, being as it is a Throwback Thursday, and being as some earlier research this morning jogged my memory about this certain Pittsburgh Steelers player, I thought I would take you way back in time to 1999 when the team decided to sign safety Travis Davis during free agency.

Even though I was 31-years old at the time, I still can’t recall much of Davis’ playing time during the 1999 season with the Steelers even though he started all 16 regular season games that year. Davis, who was originally drafted by the New Orleans Saints in the seventh-round of the 1995 NFL Draft out of Note Dame, ended up with Jacksonville Jaguars during his rookie season after being poached off of the Saints practice squad. He wound up starting 5 games for the Jaguars that year and another 28 over the course of the next three seasons.

After registering 5 interceptions and 2 forced fumbles during his career in Jacksonville, Davis signed a three-year, $3.1 million free agent contract with the Steelers in early April of 1999 and that deal included a $600,000 signing bonus. At the time, the Steelers were hoping that Davis could help the team recover from loss of safety Darren Perry, who had signed a two-year, $3.2 million free agent contract with the San Diego Chargers.

As previously mentioned, Davis wound up starting all 16 regular season games for the Steelers during the 1999 regular season and registered 76 total tackles and one interception. His main highlight that season was a 102-yard fumble return for a touchdown in the Steelers’ 30-20 win over the Carolina Panthers. Do you remember who fumbled that football? It was Panthers running back Fred Lane thanks to a big hit by Steelers linebacker Levon Kirkland. The football bounced up into the air after the hit and into the arms of Davis. At the time, it was the second-longest fumble return in NFL history.

While Davis did play extensively during the 1999 season, he was replaced on the field quite bit in the dime defense that year by fellow safety Scott Shields, the team’s then-rookie second-round draft pick. In March of 2000, the Steelers decided to go a cheaper route and they released Davis when they signed veteran safety Brent Alexander to a two-year, $1.29 million free agent contract following his release from the Panthers.

At the time Davis was released, his agent claimed that the Steelers had asked his client to take a pay cut, but Steelers then-head coach Bill Cowher refuted that and said the safety was cut loose for salary cap reasons. When Davis was released the Steelers saved the $950,000 salary the safety was scheduled to earn in 2000. However, being as Davis still had two years remaining on his contract at the time, the Steelers incurred a dead money charge in the amount of $400,000 against their salary cap in 2000.

Davis never played another down in the NFL after the Steelers parted ways with him.

Below is the basic breakdown of the original deal Davis signed in 1999.