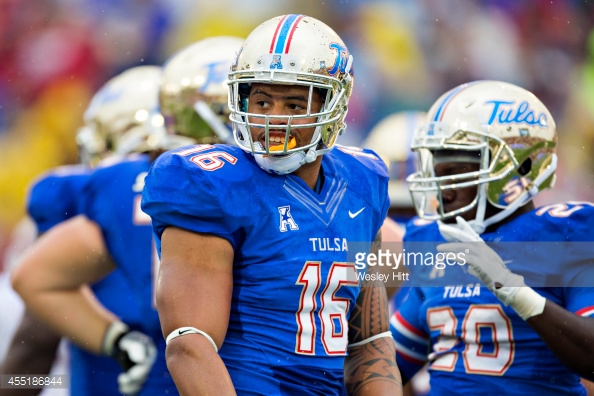 Lost in the news of Matt Spaeth’s release is the addition of a new Steeler. And that’s always exciting. It’s like having another kid. Your, uh, 90th. So who the heck is Mandel Dixon? Let’s find out.

Attending Red Oak High School in Texas, he originally committed to Pittsburg State, a D-II school that has produced players like the Arizona Cardinals’ wide receiver John Brown. There, listed as a “running back/tight end” he was used as a goal line runner. In 2011, he scored five touchdowns on eight carries, a very Jerome Bettis boxscore. He had eight carries the next year, netting 17 yards and two scores.

He transferred to Tulsa and was forced to sit out the 2013 season but earned a scholarship for the start of 2014. Said his head coach before the year started, per the schools’ media guide.

“Mandel has the size and physicality to play fullback but he also has the speed and ability to catch the ball to play out in the slot.”

He started six games in 2014 but missed four games with an unknown injury. He finished the season with six catches and six carries. He found the end zone twice, a carry and a catch.

Last season, he didn’t carry the ball once and only caught four passes for 29 yards. He went undrafted before being invited to the Dallas Cowboys’ rookie minicamp. He went unsigned.

Obviously, how Pittsburgh wants to use him is not entirely known. But his background is definitely more hybrid than being a traditional tight end. Maybe their thinking is David Johnson will see more reps in-line with Spaeth’s release, necessitating another player who has a fullback role.