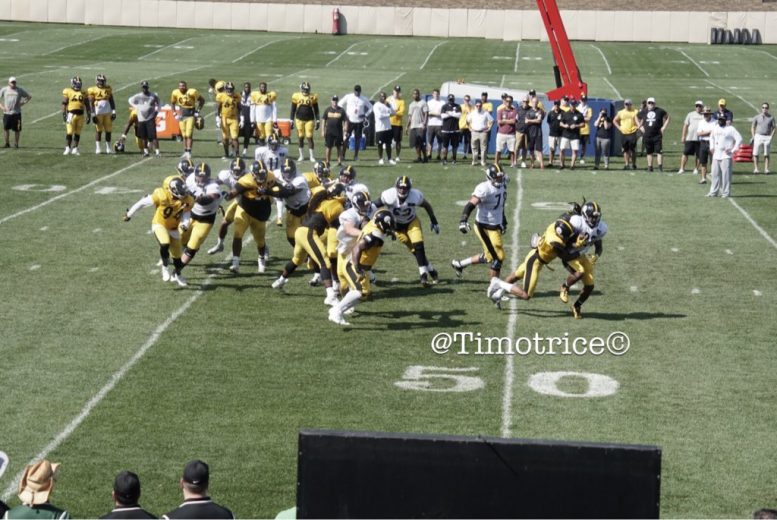 If Pittsburgh Steelers wide receiver Sammie Coates was the star of the team’s Saturday training camp practice, then third-year linebacker Ryan Shazier should probably receive that honor for the work he did during Sunday’s session at Saint Vincent College in Latrobe.

If you followed along with all of the action on Twitter Sunday, you likely read quite a few tweets about Shazier making plays during the team’s first padded practice of training camp. After practice was over, Steelers head coach Mike Tomlin was asked about the day Shazier had.

“He’s becoming what we expect him to become like a lot of guys,” said Tomlin of Shazier. “More importantly than that, he’s embracing this day-to-day process. He’s a competitor, he gave us a great workday today.”

2016 is a very crucial year for Shazier as the team must decide whether or not to pick up his fifth-year option after the season is over. While the former first-round draft pick out of Ohio State has already missed 11 regular season games during his first two years in the league due to shoulder, knee and ankle injuries, he has played well at times when on the field.

Last season, Shazier had the game of his career in Week 2 against the San Francisco 49ers. In that contest he recorded 15 total tackles before leaving with a shoulder injury that ultimately sidelined him the next four weeks. Late in the season in the game against the Baltimore Ravens, Shazier again registered double-digit tackles in a losing effort.

The key right now for Shazier is for him to stay on the practice field during training camp and continue to string together sessions like the one he had Sunday. If he can do that, and continue to avoid the injury bug during the regular season, he could wind up having a Pro Bowl-type year which would result in not only his fifth-year option being picked up during the offseason, but a Super Bowl championship prior to that in February.