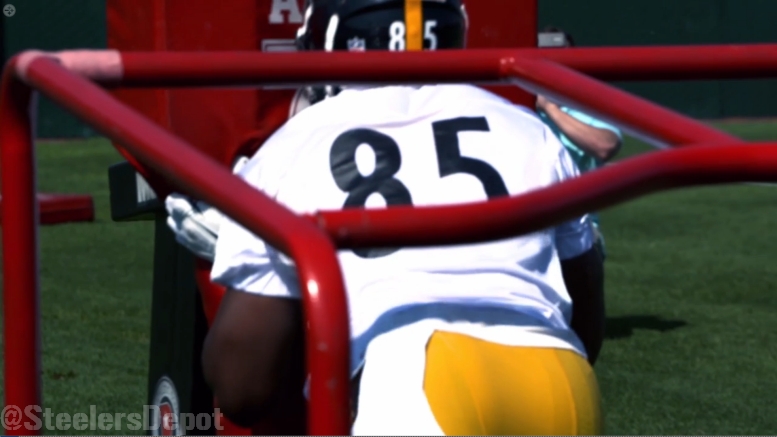 After spending the 2015 season on the Pittsburgh Steelers practice squad, former undrafted tight end Xavier Grimble has a good chance of making the team’s final 53-man roster this year out of training camp now that Heath Miller has retired and Matt Spaeth was released. While we’ve heard quite a bit of buzz about Grimble from the Pittsburgh media over the course of the last several months, Steelers quarterback Ben Roethlisberger provided even more of it recently.

“I think X is going to be good, Xavier Grimble,” Roethlisberger said of the former USC tight end, according to Ed Bouchette of the Pittsburgh Post-Gazette. “I think he’s someone to watch, I really do. I think he gives us a chance to maybe have a guy with some speed who can stretch a field and a big, strong guy who can block, too.”

While at USC, Grimble recorded 69 receptions for 731 yards and 11 touchdowns. While currently behind Ladarius Green and Jesse James on the team’s tight end depth chart, Grimble is receiving his fair share of reps during the team’s early training camp practices with Green currently being on PUP. After missing some practice time Friday due to him cramping, Grimble was back on the field again Saturday stating his case for a roster spot.

With the team donning full pads for the first time this year on Sunday, Grimble will undoubtedly get a chance to show how he is as a blocker as fans in attendance at Saint Vincent College in Latrobe figure to be treated to a session of backs-on-backers. Should he fare well in that drill, Grimble will certainly legitimize everything Roethlisberger said about him recently.