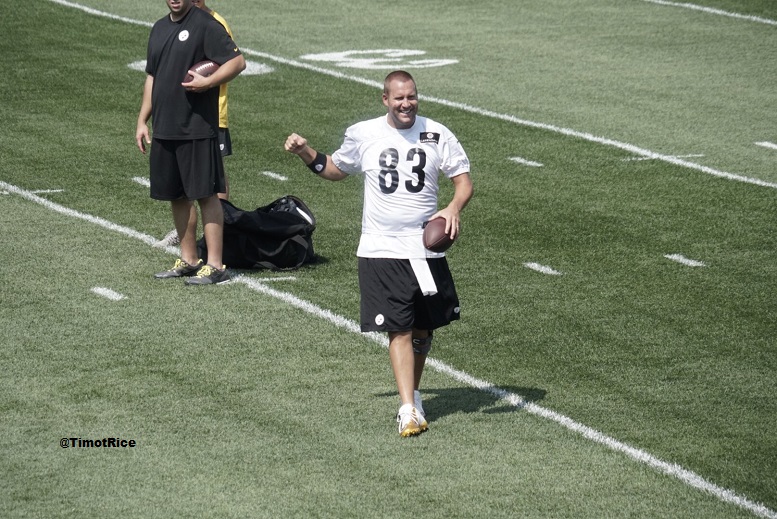 The Pittsburgh Steelers first training camp practice of the 2016 season is now underway and a few of the longtime veterans decided to honor a few of their former teammates on Friday by wearing their old numbers.

Steelers quarterback Ben Roethlisberger decided to honor former tight end Heath Miller on Friday by wearing the white No. 83 jersey. Miller retired during the offseason after a playing 11 seasons with the Steelers.

Roethlisberger wasn’t the only veteran honoring a former player on Friday, however, as long snapper Greg Warren also opened up this year’s training camp by wearing No. 6, which previously belonged to kicker Shaun Suisham, who had been with the team for the last four and half seasons.

Suisham was released by the Steelers several weeks ago after failing to overcome the knee injury that he suffered during the preseason opener last year.

It will be interesting to see if Roethlisberger honors former tight end Matt Spaeth on Saturday by wearing No. 87. Spaeth was released last week after failing his pre training camp physical.

Due to the team having a 90-man roster during training camp, the team was forced to issue numbers 83 and 87 to young players. Rookie undrafted wide receiver Canaan Severin is currently wearing No. 83, while undrafted rookie tight end Paul Lang is currently donning No. 87.

Other jersey tribute is Greg Warren sporting the #6 of Shaun Suisham pic.twitter.com/qqJ1gLLLEk