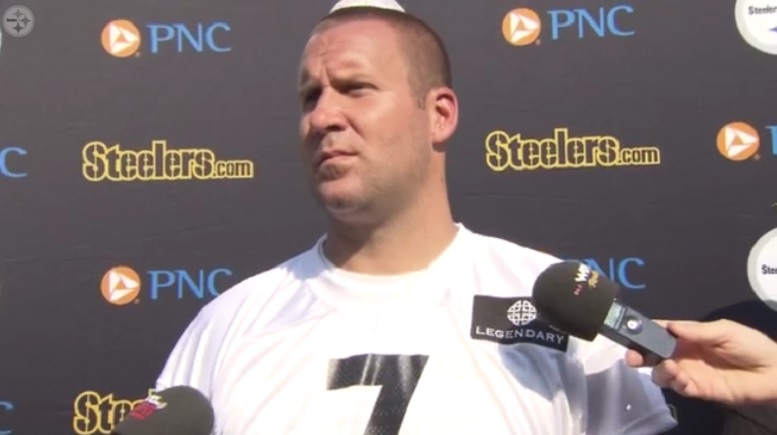 For the first time since 2004, the Pittsburgh Steelers started a training camp Friday without tight end Heath Miller, who decided to retire during the offseason. While Miller might not have been present at Saint Vincent College in Latrobe on Friday, he sure was talked about quite a bit just the same. Even Steelers quarterback Ben Roethlisberger paid tribute to his longtime tight end on Friday by wearing his No. 83 jersey during practice.

With Miller retired and his longtime backup Matt Spaeth recently being released, the Steelers are hoping a few young tight ends can step up in their absence. With that said, Roethlisberger doesn’t want Ladarius Green, Jesse James, David Johnson, Xavier Grimble, and the two undrafted rookie tight ends currently on the 90-man roster being someone they’re not. That someone is Miller.

“I think the key, and I’ve reiterated to them and I’ll continue to do that, is they don’t need to try and be Heath Miller,” Roethlisberger said after Friday’s practice. “That’s not what we’re trying to do. Just go be the best Jesse you can be, the best D.J., Xavier, whatever it is.”

Due to him being sidelined all offseason as he rehabs from ankle surgery, Green has yet to work with Roethlisberger on the field. With training camp now underway and with Green on the team’s Active/PUP list, Roethlisberger will have to wait awhile longer to start building some sort of cohesion with his new tight end, who certainly won’t be compared to Miller.

“Yeah, excited to see what he can do,” Roethlisberger said of Green, who signed a four-year, $20 million contract with the Steelers after Miller retired. “Heard a lot of things and enjoyed talking to him and kind of picking his brain on some things, but would love to get him out here. So hopefully that will happen soon.”

As for James, who has dropped 20 pounds this past offseason in preparation for his second year in the league, he’s currently receiving most of the work with the first-team offense at the start of training camp with Green sidelined. Roethlisberger was asked about the Penn State product after Friday’s practice.

“He’s doing some really good things,” Roethlisberger said. “They just have to make sure they don’t get too anxious. They’re out there kind of trying to make every play and trying to do it, be the best on every single play. So, right now, they’re doing some really good things and I’m really excited to see what they can do moving forward. Especially when we get pads on.”

That’s all probably just code for, “None of these guys are Heath Miller.”

As for Steelers head coach Mike Tomlin, he was also asked about Miller and James on Friday.

“Man, I just miss him – the guy, the man,” Tomlin said of Miller not being around for the start of training camp. “Obviously, the wheels just keep on turning and in this business the plays are going to be made by someone, but really just have a great deal of respect and appreciation for the guy.”

Will James be a someone who can make plays now that Miller is gone?

“I’ll let you know in about six weeks or so,” Tomlin said. He later added, “He’s highly conditioned. That’s a great place to start.”