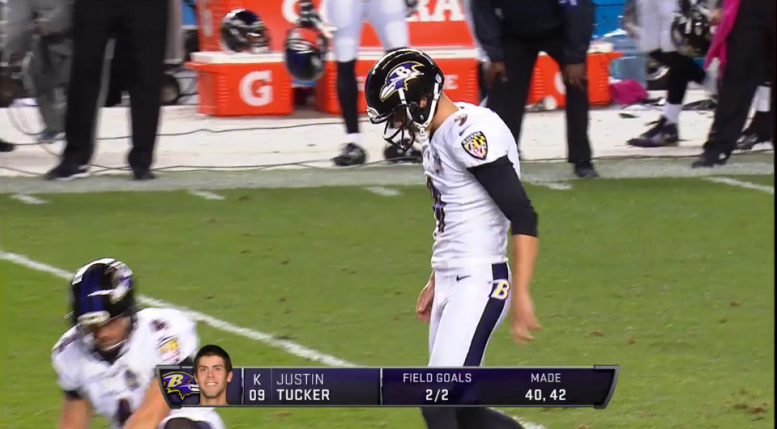 He’s been a thorn in the Pittsburgh Steelers’ side for years but fans may have to endure him for just one more season.

ESPN’s Adam Schefter reported yesterday Baltimore Ravens’ kicker Justin Tucker has threatened to sign elsewhere in 2017 if the team is unable to work out a long-term deal before today’s franchise tag deadline.

Ravens' K Justin Tucker is so frustrated with negotiations he's vowing not to re-sign with BALT after season if no long-term deal by Friday.

Here is the full statement Tucker’s agent Rob Roche – via Schefter – on the situation.

“Justin’s disillusioned with the process right now and the Ravens’ position with him on his contract. If we don’t get a long-term deal done by Friday, Justin will not entertain offers from [the] Ravens after the season.”

Schefter reports the frustration comes from the Ravens offering Tucker less than what Mason Crosby received, five years and $16 million back in March, and even less than a previous offer the team made to Tucker. If that’s true, it’s no surprise that he’s upset, a slap in the face to anyone on the receiving end of such a negotiating tactic.

Baltimore slapped Tucker with the tag on March 1st, a one-year deal that would net him for $4.5 million. But Tucker, like practically all players under the tag, would prefer the long-term security – still a loose term in the non-guaranteed world of the NFL – over a one-year deal.

Tucker’s been one of the league’s best kickers, possessing a monster leg. In addition to having one of the highest touchback rates in the league, he’s also made 18 field goals of 50+ yards in his four year career. He did struggle a bit from distance last year, going just 4/10. One of those, however, was a 52 yarder in overtime to beat the Steelers in Week Four.

He’s had more success versus the Steelers than any other team. His 79 career points is a high compared to any other team and he’s gone a whopping 22 of 23 in his career against Pittsburgh.