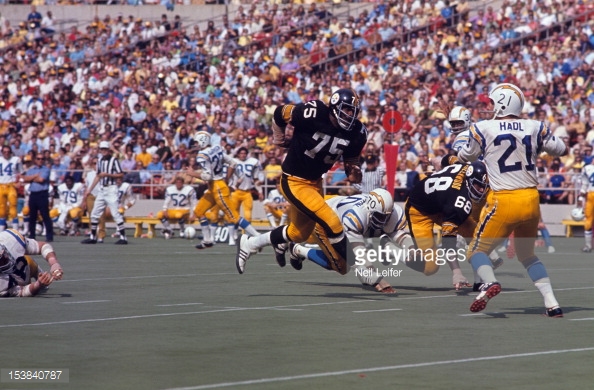 Side note: We’ll do one final post to show complete versions of Dave and I’s personal Top 100s just so you can get a clearer look at the differences. And if you’re playing along at home, the chance to compare it with your own list.

Even though Bettis was originally drafted by the Los Angeles Rams in the first-round of the 1993 NFL Draft out of Notre Dame, it didn’t take him long to find his way to Pittsburgh as the Steelers traded for him in 1996. During his 10 years in Pittsburgh, Bettis rushed for 10,571 yards and 78 touchdowns. He was a four-time Pro Bowler during those 10 seasons and named a First-Team all-Pro once in 1996. In his first season with the Steelers he was named the NFL Comeback Player of the Year and in 2001 he was named the Walter Payton NFL Man of the Year. Bettis ended his career as a Super Bowl champion and he was voted into the Pro Football Hall of Fame in 2015. He is currently ranked sixth on the NFL’s all-time leading rushing leaders list.

He earned the reputation of someone who dealt with a lot of injuries, born from his reckless style, but the dude still started 142 games. And there were some of the greatest starts fans have ever seen. 32 interceptions, none more famous than his pick six of Joe Flacco in the 2008 AFC Championship game. Some of his great plays never even counted. His interception against the Colts in 2005, his end-of-game non-touchdown against the Chargers, leaving the score 11-10.

For my money, the greatest individual play he ever made, looking at it without context, was his one-handed diving interception against the San Diego Chargers.

But Polamalu can’t be summed up with just numbers. He transcended everything on the box score. He was a nightmare for every offense and even though he had that target on his back, no one could figure out how to stop him. He played football relentlessly, every single snap he gave. That’s something few players can say with sincerity.

Polamalu is a first ballot Hall of Famer. No question, no doubt. And he’s the guy you’ll tell your grand kids about. As you should.

Drafted by the Steelers in the first-round of the 1972 NFL Draft out of Penn State, Harris will probably always be best known for his Immaculate Reception in Pittsburgh’s playoff game against the Oakland Raiders during his rookie season. Harris rushed for more than 1,000 yards in 8 seasons while a member of the Steelers and was selected to 9 consecutive Pro Bowls from 1972 through 1980. He was named a First-Team All-Pro in 1977 and in addition to being part of four Super Bowl championship teams, he was named MVP of Super Bowl IX. Harris rushed for 11,950 yards and 91 touchdowns during his 12 years in Pittsburgh and was voted into The Pro Football Hall of Fame in 1990.

Swann didn’t play for a long time but he didn’t have to. He’ll be impossible to forget. The Steelers were a physical bunch but Swann played the foil, a graceful acrobat who made everything look effortless. He will be remembered for his highlight reel catches, including his circus grab against the Dallas Cowboys. It’s one you’ve seen 1000 times before but never gets old.

In his career, Swann made three Pro Bowls and one All-Pro team. Twice he caught 11 touchdowns, leading the league in 1975. In the Steelers’ 1978 Super Bowl run, he caught 13 passes for 274 yards and three touchdowns. He owned the Cowboys in football’s biggest game, catching a combined 11 passes for 285 yards and two scores in two meetings.

Drafted by the Steelers in the first-round of the 2004 NFL Draft out of Miami of Ohio, Roethlisberger has already thrown for 42,995 yards and 272 touchdowns in his first 12 years in the league. He is currently in 13th place on the NFL’s all-time passing yardage leaders list and has twice thrown for more than 500 yards in a single game. After winning the NFL Offensive Rookie of the Year in 2004, Roethlisberger has gone on to win two Super Bowls with the Steelers along with three AFC Championships. He is a four-time Pro Bowler and is the franchise’s All-Time Leader in Career Wins, Passing Touchdowns, Passing Yards, Pass Attempts and Pass Completions.

I am lower on Bradshaw than Dave but you better turn in your Terrible Towel if you’re going to talk bad about #12. Once he found his NFL footing, he was unstoppable. Quarterbacks are judged by rings and Bradshaw’s 4-0 record still blows my mind.

So many thought he was a dumb guy but we know he called his own plays and commanded this vertical passing attack. Tough as nails, a threat as a runner – the Immaculate Reception doesn’t happen unless Bradshaw keeps that play moving – with a monster arm.

It’s pretty crazy he made just three Pro Bowls, only twice more than Super Bowl MVPs. But the rings speak infinitely louder than trips to Hawaii.

Originally drafted by the Steelers in the fifth-round of the 1974 NFL Draft out of Wisconsin, Webster played 15 seasons in Pittsburgh and was the starting center for 13 of them from 1976-1988. A nine-time All Pro and Pro Bowler, Webster was a member of the four Super Bowl winning Steelers teams of the 70s. He was voted into the Pro Football Hall of Fame in 1997 and unfortunately passed away in 2002 at the age of 50. Webster was named to the NFL’s Anniversary All-Time Team in 1994. He played in 220 games during his career in Pittsburgh and started 194 of them.

I gotta admit, I didn’t realize Blount and Bradshaw came in and went out the same years. But it’s fitting, two tough, Hall of Fame dudes who led the dynasty. He made Bud Carson’s Cover 2 work, taking full advantage of a time when the league let you push and shove from end zone to end zone. It was enough to change the rules, mandating the five yard chuck, but still didn’t slow Blount down.

He is the franchise’s leader with 57 interceptions including a franchise record 11 in 1975. In a three year span, starting in ’75, he picked off 23 passes. Blount made five Pro Bowls and was inducted into Canton in 1989.

Also, you have to love that Cowboy hat. Even Burt Reynolds/Turd Ferguson is impressed.

Drafted by the Steelers in the second-round of the 1974 NFL Draft out of Kent state, Lambert became the league’s premier linebacker with his intense style of play which spanned for 11 seasons and 146 regular-season games. A nine-time Pro Bowler and seven-time First-Team All-Pro, Lambert was the NFL’s Defensive Rookie of the Year in 1974. He was named the league’s Defensive Player of the Year in 1976 and was part of the Steelers teams in the 70s that won four Super Bowls. He recorded 28 interceptions and 17 fumble recoveries during his long career and was voted into the Pro Football Hall of Fame in 1990.

Yeah, you knew we weren’t going in another direction here. Unequivocally, Greene was the man who jump started a loathsome franchise. He didn’t accept losing, he and Chuck Noll literally changing a culture in four years. I’d give my years supply of Bagel Bites to know exactly how many career sacks he had. In this 2014 article, the PPG lists him with 66. It would’ve been more had a nerve injury in his shoulder cut his career, the prime of it at least, a little short.

Greene made the Pro Bowl in each of his first ten years and was a five-time All-Pro. He was fierce, a menace to every backfield he faced, and a champion.

He was also the greatest to ever wear a Steelers’ uniform.