Ramon Foster – Be A Steady Presence For Villanueva

From a personal standpoint, Ramon Foster is what Foster is at this point in his career. His career isn’t going to magically transform into another level. That’s totally fine but when we’re looking at areas to improve, they’re naturally going to have to be indirect.

There was no better news Alejandro Villanueva could’ve received this offseason than seeing Ramon Foster returning to Pittsburgh. Foster was his Mr. Miyagi last year. He probably even had Villanueva washing his car. Definitely carrying his pads around.

Villanueva was very much in that “newborn deer” phase in 2015. Struggling to find his footing, constantly nudged by Foster to keep his balance. Now, Villanueva is a majestic fawn ready to take on the world.

But that doesn’t mean he still doesn’t need some support. And the relationship he and Foster have is critical. Stunt pickup was a habitual issue last season to the point where – as I wrote about before, I believe Mike Munchak decided to use “man coverage” on them instead of the traditional zone pickup, passing off the stunting linemen, which Marcus Gilbert and David DeCastro still did.

I showed an example of it in a stillshot from the Indianapolis Colts game. You can totally see how lost Villanueva is even in just the picture, back turned to the play, totally lost. 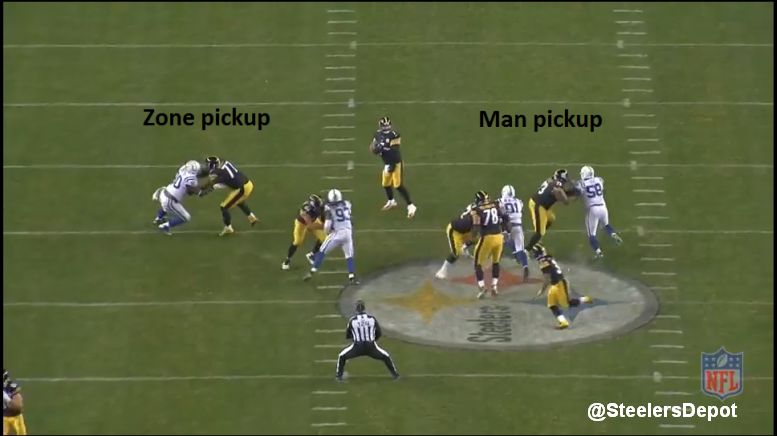 As the season went on, Villanueva improved, and Munchak did zone up some of the stunts. But when the two struggled to get on the same level, crucial for picking up stunts (or else the penetrator has a crease to shoot through) they want pback to man-to-man.

The same happened on some of their zone blocks too, miscommunication on who was staying on the first level and who was moving to the second. From the second Cincinnati Bengals’ game. This resulted in Geno Atkins busting the play in the backfield. Definitely one guy you don’t want roaming free. 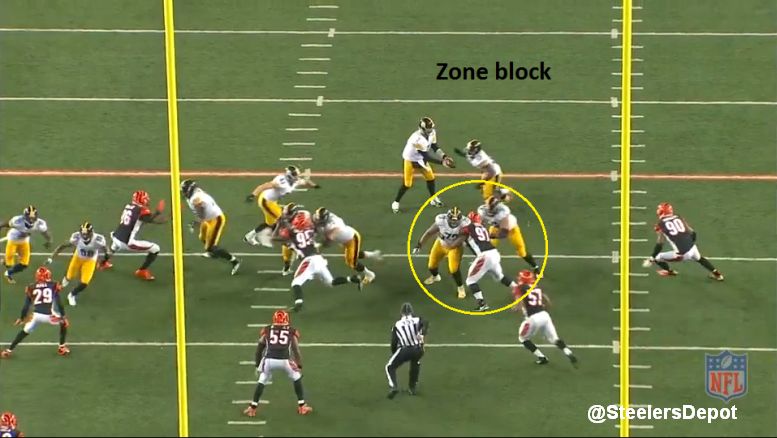 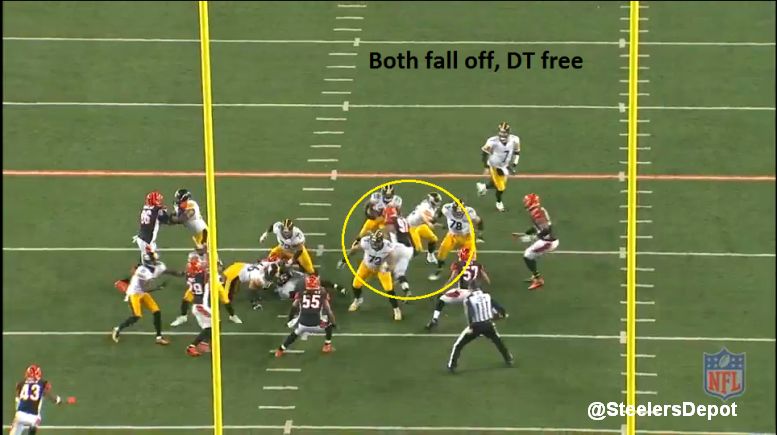 To be fair, as I’ve said repeatedly, things generally got better as the year went on. Just as you’d expect. But there’s still a long ways to go. In Year Two, I’m hoping the Steelers offense won’t have to adjust their scheme to accommodate the issues Villanueva faced. He and Foster showing they’ve made progress will go a long way in proving that.