I think I’ve been pretty clear on my analysis of how Alejandro Villanueva performed last season. A rocky start, a better finish, but still, a ways to go.

Pass rushers and pass protectors are in a constant chess battle. Trying to get a read on the other, anticipate their move, counter it. And Villanueva is lagging a bit in that area. That’s understandable, he’s still country green, but he needs to add a few tricks up his sleeve, another move in his arsenal, so defenders can’t figure him out.

“Break the wrist, walk away.”

That’s what Rex Kwon Do taught us in Naploean Dynamite. Perhaps that’s the inspiration for Villanueva’s go-to move, his vicious judo chop that sends oblivious defensive ends into the Earth. Seriously, the dude is going to snap someone’s arm one day.

Check out this two hand swipe on Kansas City’s Allen Bailey, who tips the scales at 6’3, 288. Big man going down hard.

Villanueva doesn’t need Rex’s American Flag pants. Veterans are always wearing them. In that clip, Bailey sure looks a lot like Kip Dynamite.

But. Pass rushers aren’t stupid. Just in the way tackles study how defenders attack them, defenders get their scouting report, too. How does the tackle set? How aggressive is he? You get the idea.

And those veterans, the ones who have seen it all, gave Villanueva a lot of trouble. When you rely on just one move, you’re easy to figure out.

We’re going to start with Villanueva’s first appearance, replacing Kelvin Beachum in the Arizona game. Yes, new guy getting thrown to the wolves, so at that time, we were grading on the curve. But there are still some important lessons to take from.

And that day, Dwight Freeney was the teacher.

These clips take place on back-to-back drives. Third down. Freeney, lines up in a Wide 9 technique, uses a speed bull rush at Villanueva. Villanueva does a decent enough job of rebuffing it, using his superior size and strength to his advantage. I wouldn’t call it pretty but it’s effective. Sometimes, that’s good enough.

Fast forward to the next drive. Third down. Freeney is again lined up in his wide nine tech. Villanueva is thinking another bull rush. He’s ready, he’s bracing himself, he’s leaning in, just a little, to try and catch him.

And Villanueva becomes less of a tackle and more of a matador.

“A sale is made on every call you make.  You either sell the client some stock or he sells you a reason he can’t.  Either way it’s a sale.”

That’s what Ben Affleck told his group of trainees in Boiler Room, one of my all-time favorite movies. The same idea applies to the football field. Someone is making a sale. Either the end sells you or you sell the end.

And it was Bennett, again, outclassing Villanueva. He’s now lined up as the 4i, the inside shoulder of the tackle. And he hits the left tackle with a little inside-out move. Initially steps in like he’s going to split the B gap (his initial shade naturally gives this indication to). Villanueva steps down hard to fill it, to the point where he’s overlapping with Ramon Foster.

And that’s when Bennett dips and rips his way to the outside, getting under his 6’9 frame and a path to the quarterback.

Let’s revisit that chop Villanueva possesses, since that’s what got us started. He was using it almost to a crutch against the Seattle Seahawks. And Michael Bennett wasn’t having any of it.

Luckily, Bennett gets caught in the wash of the slide protection and Foster picks him up. No harm, no foul to Ben Roethlisberger. But tackles shouldn’t be judged solely on if they give up pressure or not. This isn’t 1971. That’s an antiquated thought.

Realizing that Villanueva has a limited arsenal – that chop posing the largest threat – defenders often choose not to try and hand fight him. He’s too long, a punch too strong, it’s just freaking hard to get around him. Instead, they’re choosing to initiate contact first. Bull rush him, get into his chest – there’s so much surface area – and walk him into the pocket.

That’s what Aldon Smith decided to do. And Villanueva is on skates.

How do you defend the bull rush? Personally, I think it’s one of the hardest things to do and it’ll rarely make a highlight reel. Let’s check out what former Steelers’ offensive line coach Larry Zierlein suggests. 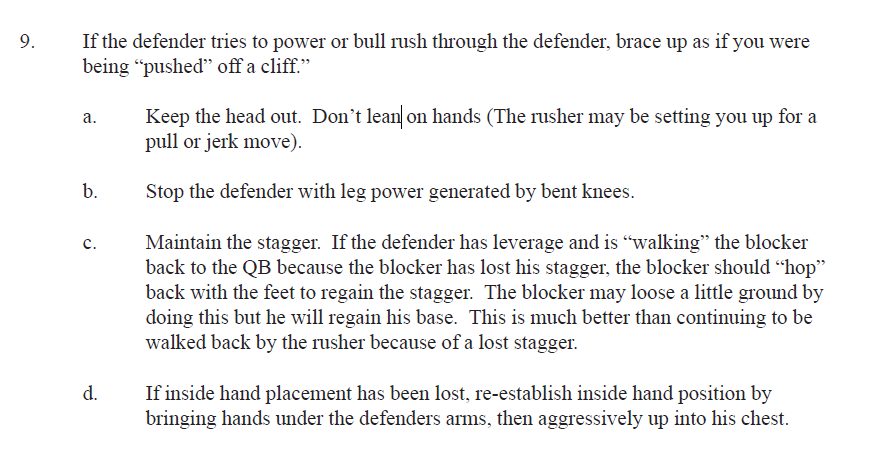 You can see Villanueva lose his stagger and instead of hopping back, giving a little ground to eventually gain, he just tries to win with his upper body. He winds up getting pretty personal with  Roethlisberger, a sight no quarterback wants to see.

We’ve been ragging on Villy a lot in this post though again, keep in mind that’s sort of the point in this series. I believe the Steelers will frame their left tackle spot as a competition because that’s good for the players and the team, but I severely doubt Ryan Harris actually wins the job. He’s better suited as that versatile backup, someone we know can play left or right tackle. I’m excited to see the steps Villanueva can take. There are several areas to correct but if he makes the strides he did last year, any shroud of doubt will dissipate.