Most of us believe Le’Veon Bell, though not official, will wind up missing the first four games of the 2016 season.

Maybe the only person who doesn’t is Bell himself.

Sometime around 2 AM/EST, Bell took to Instagram to respond to one user’s comments about him missing the first month of the season. Here is the link to the original Instagram post, featuring one of the popular Photoshop jobs floating around since the news.

All you can do at this point is laugh….

Here are screenshots of Bell liking the post and the two comments he left on the thread. 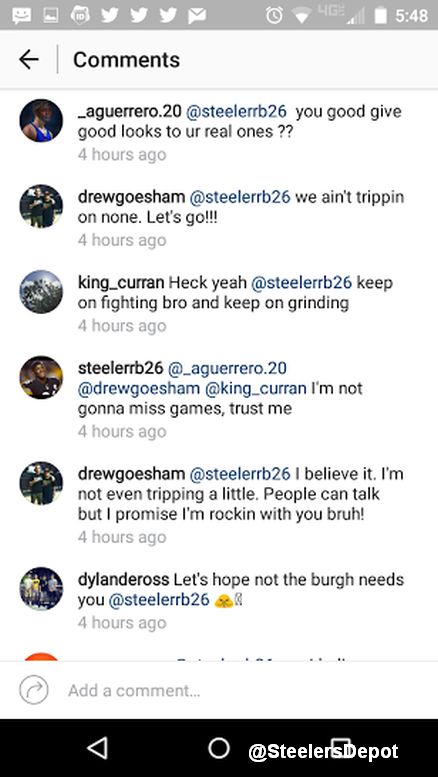 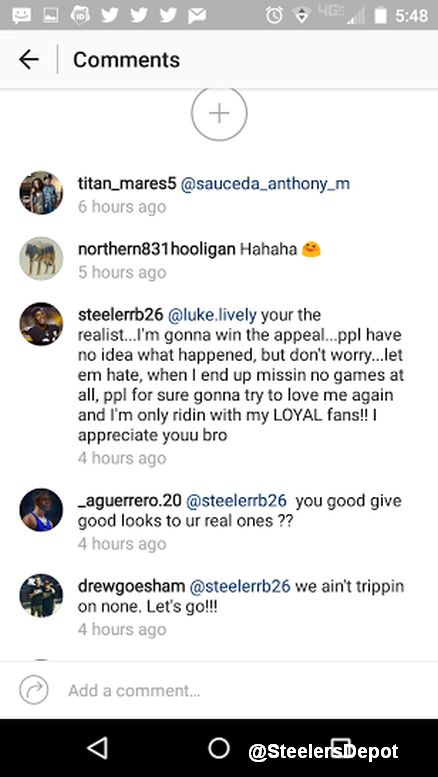 For additional proof, in case you think it’s a fake account trolling, here’s a clip of me clicking on the user through the Instagram post, taking me to Bell’s official page.

These comments appear to be genuine, though we’re always mindful of player’s accounts being hack. There is no other unusual activity on his page, making me think this response came from him.

Of course, we all understand that his words are not gospel. Bell is the most likely of anyone to believe his is going to prevail. But we now, thanks to the many wonders of the Internet, have our first unofficial/official response from the Steelers’ back.

That message? Confidence that he’ll be playing with his teammates Week One in Washington.

It is unclear exactly when the league’s appeal process will be completed but based on these comments, he has no intentions of dropping his case. It’s not certain what defense he’ll use after allegedly missing “multiple” drug tests. To many, myself included, it’s hard to imagine the league changing their mind. But our view comes from 30,000 feet in the air, not in Bell’s inner circle. Roger Goodell reduced last year’s suspension from four (edit: three) to two games but in this situation, it seems like this will be an all-or-nothing result. A complete reduction or none at all.