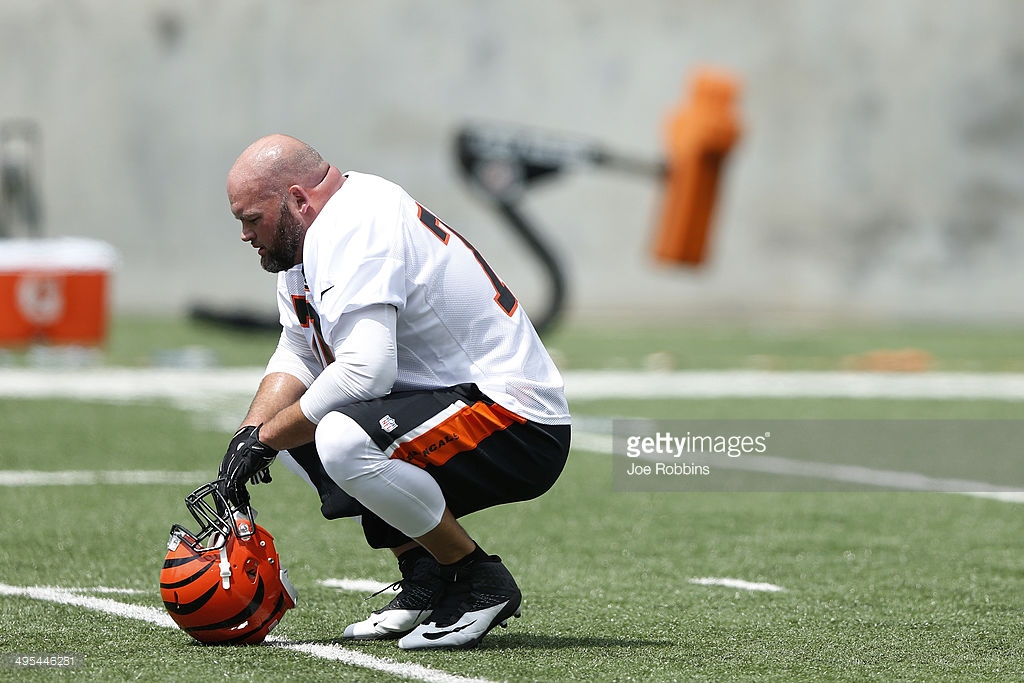 Veteran Cincinnati Bengals left tackle Andrew Whitworth is entering his 11th season this year after he signed a one-year extension in the 2014 offseason to assure that he remains with the Bengals in 2015. He doesn’t want to play anywhere else.

But he might, if he had to. If he plays in 2017. Or if he plays guard or tackle. Or even as a blocking tight end, he joked. Basically, he was saying that he doesn’t really know what the future holds for the Pro Bowler soon to turn 35, certainly an age at which it begins to be a rarity for a lineman to still be in the league, let alone starting.

His teammate, Eric Winston, is not even as old at 32, but he has already moved on to that stage of his career in which he now understands that he is a backup, after starting every game for seven straight years. Winston is entering his third season with the Bengals, his second full season, and started four of 17 games played.

Widely regarded as one of the top tackles in the league, it has only been recently that Whitworth has begun to get the recognition that he deserves, with both of his Pro Bowls coming recently. But at his age, neither he nor the Bengals’ front office is sure what the future holds for him.

And they have already begun to plan for the future, as they used their top two draft picks last year on offensive tackles in Cedric Obguehi and Jake Fisher, but both have spent much of this offseason sidelined by injuries. One of them already will have to replace Andre Smith on the right side.

Whitworth, the man with the greying beard along the offensive line, wants to keep his options open, a fact that he repeatedly mentions when asked about his future plans, quite simply because he doesn’t have any future plans at the moment. He doesn’t even have a contract for the 2017 season, though that could easily be arranged if he decided to play next year, no doubt.

He knows that the NFL calendar is a long and taxing one, though he says that the regular season is not as tough as it used to be since they changed the practice rules, and he is able to give his body more time to rest. But he also knows that there is a mental toll to pay as well, and that there must be passion to play.

Will that passion be there next year? And will it be enough to be willing to move to guard on a full-time basis? He had only played there for about a month due to injury a couple of seasons ago, but it has been talked about. Will that passion be enough to withstand the stress of uprooting his family if he finds his place is no longer in Cincinnati?

These are the sorts of questions that the older veterans begin to face as their clock winds down on their professional careers, and each of them must ultimately determine what is the right answer for themselves and their families.