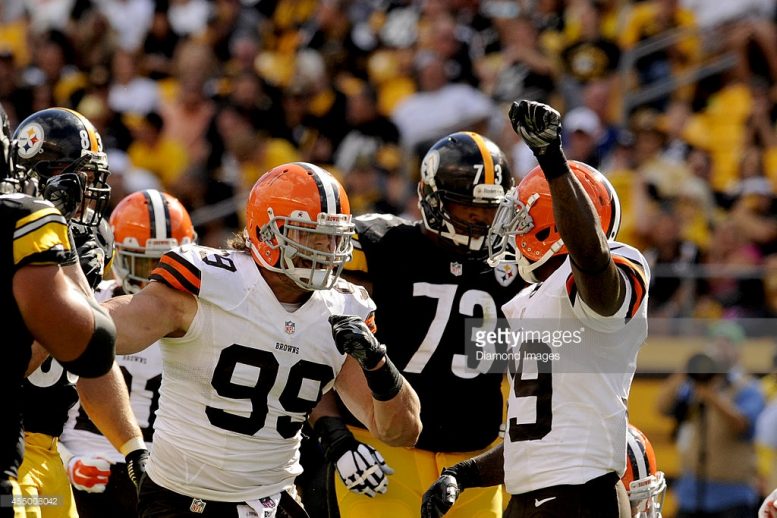 When it comes to the Pittsburgh Steelers’ Ohio rivals, the Cleveland Browns and the Cincinnati Bengals, they have never necessarily been viewed as shrewd financial business enterprises when it comes to the football field. While the Bengals have improved lately, to be sure, both have had their fair share of bad contracts, particularly with free agent signings.

Pro Football Focus recently looked at two contracts, one from each, in a list of what they refer to as the five worst contracts for edge defenders, and representing the AFC North are the Bengals’ Michael Johnson and the Browns’ Paul Kruger.

Johnson, originally drafted by the Bengals, signed a big free agent contract with the Buccaneers in 2014 only to be released, and Cincinnati re-signed him, to a four-year, $20 million deal, plus an additional $7 million available in escalators.

While Johnson had one standout year in 2012 with 11.5 sacks and 53 tackles, the rest of his career has not matched that, and his five sacks last year are the third-most in his career behind the 5.5 that he had in 2011, which makes PFF and many others wonder how to justify his contract.

With an average per-year cap of $5.8 million remaining, they write that 2017 is the earliest that he can be realistically cut, and noted that Johnson’s pass rush lags significantly behind, concluding that while his contract is “not obscene”, run defenders at defensive end “are a dime a dozen, and probably not worth around $6 million per season”.

As for Kruger, a former second-round pick of the Ravens who cashed in on an encouraging 2012 postseason run that he has failed to lived up to both previously and since, he falls two spots behind Johnson’s third-worst edge defender contract as the fifth-worst.

With an average remaining cap hit of nearly $8 million over the next two years, he can’t be realistically cut until next year. They note that that average over the life of the first three years was much less palatable with the cap being significantly lower in 2013 when he was first signed, and delivered less than five sacks.

Despite just 2.5 sacks last year, PFF actually writes that Kruger “performed adequately” as a pass rusher and that he registered 43 pressures, but just 11 resulted in knockdowns. More worrisome was his below average run defense grade that they assigned him.

Certainly neither of these players have developed into the players they were believed to be able to become, for either side, and when viewed from a financial perspective relative to the sort of production being returned for the investment, PFF believes these are among the worst contracts for edge defenders in the league.