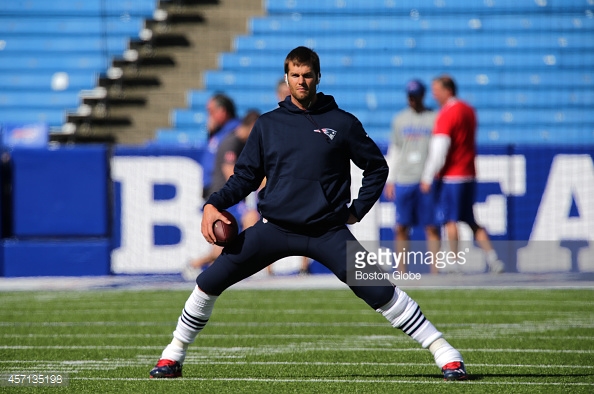 Pictured above: the only uniform Tom Brady will be able to wear for the first month of the season.

You’ve probably heard the news before but if you’re a hardcore Steelers’ fan, you’re probably snickering. At least a little.

Brady’s appeal over his four game suspension was denied today by the Second U.S. Circuit Court of Appeals. Had it been granted, there would’ve been a rehearing to judge whether or not Roger Goodell has the authority to issue such a suspension.

Now, Brady is left with only three options. And none of them seem likely.

Getting the Supreme Court to accept the case in itself is a total longshot and even if they do, their decision could still wind up being deadlocked at 4-4. There are currently only eight justices on the bench after the passing of Antonin Scalia.

In short, it’s looking almost certain that Brady will have to sit out the first month of this season. If he does, Jimmy Garoppolo will serve as interim quarterback. The New England Patriots face the Arizona Cardinals, Miami Dolphins, Houston Texans, and Buffalo Bills over the first month. That schedule isn’t incredibly daunting and it’s perfectly reasonable to assume the team goes no worse than 2-2.

Brady will be back when they travel to Pittsburgh for a Week 8 matchup on October 23rd. New England has won three of the last four regular season meetings. The Steelers lone win came in 2011, winning 25-17.

The only other time the Steelers have beat Brady came way back in 2004, Ben Roethlisberger’s rookie year, where Pittsburgh won 34-20. That was part of their 15-1 season, including back-to-back victories over the previously undefeated Patriots and Philadelphia Eagles.