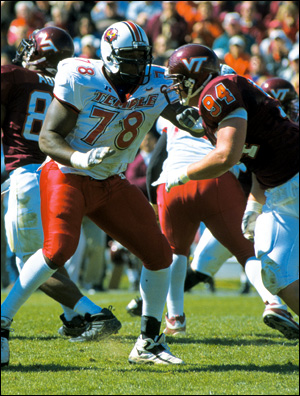 Mathias Nkwenti was another guy I don’t think I’ve ever heard of and definitely don’t remember. Partly because he played when I was barely ten years old, partly because he rarely saw the field, and partly because he was an offensive tackle. And most of those dudes don’t end up on the Wheaties’ box.

But Nkwenti did make a little bit of history. He became the first player from the Cameroon, born in Yaoundé, before moving to the states early in his life. He grew up in Maryland, played football at Temple, converting from a defensive linemen to a tackle. Sound familiar?

The Steelers took him in the 4th round of the 2001 draft. At the time, the Post Gazette gave a brief scouting report on him. 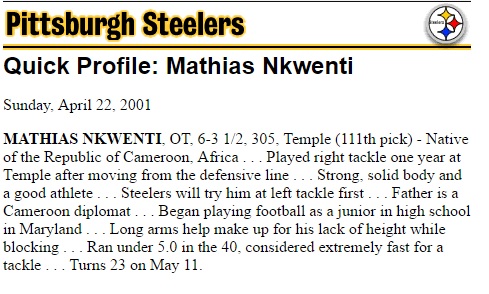 Nkwenti played only two games, one apiece in 2001 and 2003, according to Pro Football Reference.

Despite having a reportedly strong camp in 2002, he still didn’t see the field. He flipped between left and right tackle, “struggling with stunts” per Gerry Dulac, but he finally saw action in October of 2003 against the Denver Broncos after Todd Fordham hurt his back.

But a back injury hit Nkwenti too and basically ended his career. Before the Broncos game, he was listed with a back spasm injury but played anyway. Following the game, the Steelers immediately ruled him out with “disc fragments” in his back, requiring surgery and shelving him for the rest of the year. He was placed on IR on October 23rd.

He reflected on that injury in an interview with the Pittsburgh Daily Bulletin in 2014.

“I was offered a ton of contracts, but I injured my back. I knew I was done. It would have put my ability to be healthy later in life if I kept on playing. I knew it was a life-long injury…”

That Broncos game was the final NFL appearance he’d make. Pittsburgh originally tendered him but rescinded it less than two months later, likely out of concerns for his back injury.

The New York Giants signed him in June of 2004. But he was released a month later, right before training camp, again, likely because he simply was not healthy enough to participate.

He hung around Pittsburgh it appears for at least several years. In 2009, right after The Rivers Casino opened up downtown, Nkwenti was charged with harassment and disorderly conduct for getting into a fight with his wife. She allegedly hit him in the head with her purse, he pushed her to the ground.

In that 2014 interview with the Daily Bulletin, he said he was back in the Cameroon. That’s the last thing I could find of him.

Mathias Nkwenti, your blast from the past.