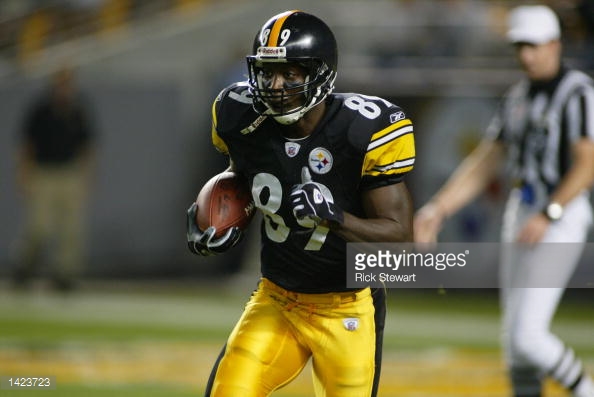 Lee Mays is like so many of the receivers we’ve profiled. A slight footnote in Steelers history but if you’ve forgotten about him, you’re not missing much.

I remember Mays because of what happened in the second grade. The assignment Mrs. Nicholas gave us was to write and draw what we wanted to be when we grew up. I, being the stupid kid who tried to be cute and not just write “astronaut” or “President,” wrote “I want to be a wide receivers coach.”

It is arguably the dumbest response anyone has ever given to that question and I apologize profusely for my 7 year old self’s stupidity.

But on that drawing, was a picture of me and, you guessed it, Lee Mays. His rectangular body, circular face, and sticks for arms and legs. Warhol, I was not. But there we were.

Clearly, my big dreams never happened. But Mays’ career did exist, if only for the briefest of times.

A sixth round pick out of UTEP in 2002, he officially spent three years with the Steelers, recording 11 catches. Nine of them came in 2004 including three in a win over Jacksonville. The following week, he caught a 46 yard pass against the New York Jets. Mays also caught two passes in the wacky playoff win over the Jets, the famous Doug Brien debacle for Jets’ fans.

Mays’ main role came in 2002, serving as the team’s starting kick returner. He returned 32 kicks for an average of just 21 yards, no return longer than 35.

In the offseason following the 2004 season, he was tendered to the minimum as a restricted free agent. He was beat out by Nate Washington in camp in 2005 but signed back for the playoffs. I do not believe he was ever active, however. He was brought back to camp for 2006 but released again at the end of camp. But the team brought him back once more in December, along with Chidi Iwuoma, to finish out the season. He was active for one game but didn’t make a mark on the stat sheet.

I found one video of Mays from literally two weeks ago, giving a brief discussion on his high school recruiting story and what the landscape is like today. Check it out and get that view count into double-digits.

Mays was named to UTEP’s All-Centennial team in 2014 along with players like Don Maynard and Johnnie Lee Higgins, three names I thought would never appear in a sentence together.

Job wise, he’s bounced around since moving onto Life’s Work. Luckily, everything is listed neatly on his LinkedIn page. He served as a color commentator for the defunct El Paso Generals in 2007, sold medical supplies for three years, worked in graphic design, and currently works as a Loss Prevention Supervisor for Hotel ZaZa in Houston.

Lee Mays, your blast from the past.