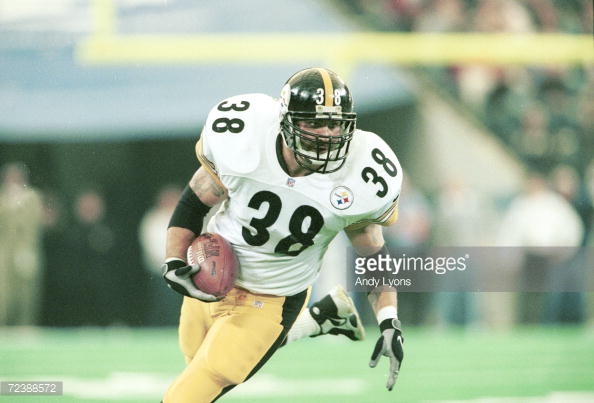 By reader request, we’re making an effort to cover the late 1990-early 2000 players. An era I don’t remember the best because I was still in elementary school and trying to figure out how the heck fractions work (actually, I still am), and a time when the Steelers were not the best. The 1998-2000 stretch produced three seasons that ranged from “sigh” to “groan,” though followed up by a great stretch in 2001 and 2002.

Jon Witman made it to the 2001 season, a 13-3 showing. A 240 pound fullback from Penn State, he was tasked with replacing Tim Lester, who paved the way for Jerome Bettis’ remarkable 1997 season. Witman was never as revered as Lester but those Steelers’ rushing attacks were pretty good in their own right. In 1999, Pittsburgh finished 10th in total rushing yards. The next year, they jumped up to fourth, though it should be noted that was part the product of just running the football so darn much. The Steelers were top five in attempts both seasons.

In 2001, Witman’s final year in the league, the Steelers’ offense soared. First in rush yards. Second in touchdowns. Second in yards per carry. Bettis averaged 4.8 yards per touch – a career best in Pittsburgh – and hopefully he bought Witman a couple steaks for his effort.

In the Blast From the Past, old online newspaper edition, here’s an excerpt from a 2000 Gerry Dulac column centered around Whitman.

“Witman put on such a punishing performance of blocking in the 24-13 victory against the Jaguars that his teammates and coaches have been talking about it all week. On one play, he slammed into Jaguars linebacker Kevin Hardy and knocked him back so far that Chris Fuamatu-Ma’afala had a big hole on a 12-yard run to the Jaguars’ 3.

‘He blocked his backside off,’ tight end Mark Bruener said. ‘He really neutralized their linebackers, and that was one of the strengths of their defense.'”

Just like Bettis, and the way all good old-school fullbacks should be, Witman was physical to his core. And linebackers paid the price week after week. He handled the rock a little bit too, 37 carries and 39 catches in his career. He had one career touchdown, the 1996 playoff win against the Indianapolis Colts, scooting in from 31 yards to secure victory.

I couldn’t find that play but I found a highlight reel of the Steelers 1999 35-19 loss to the Kansas City Chiefs because the Internet is equally remarkable as it is random.

– Jerome Bettis running people over
– Levon Kirkland still looking like three people stuffed in a trenchcoat
– Tony Gonzalez catching all the touchdowns (the Steelers couldn’t cover the tight end back then, either)
– Troy Edwards doing some things
– Mike Tomczak throwing so many interceptions (be sure to give extra thanks to Ben Roethlisberger tonight)

And there is Witman, #38, throwing a couple blocks and catching a pass at around the 4:18 nark.

Ed Note: You’ll have to watch the clip on Youtube. NFL blocks watching it through here.

Jon Witman, your blast from the past.