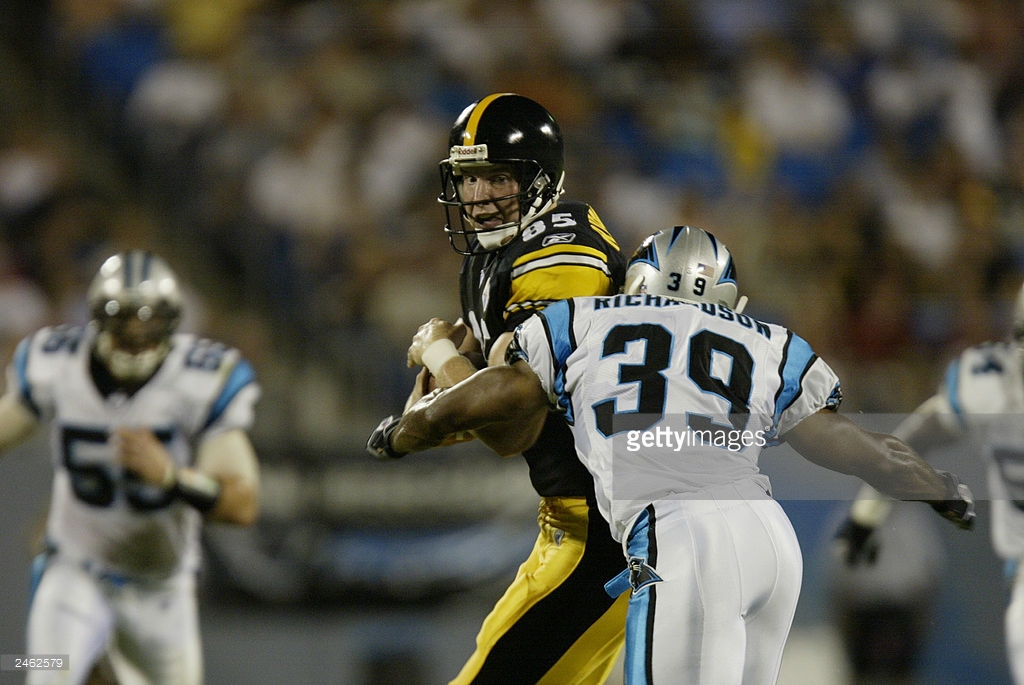 Today’s BFTP is Jay Riemersma, a name I instantly regret choosing after realizing how difficult it is to type out his last name. He has more “m’s” and “e’s” than touchdown catches in Pittsburgh. That isn’t a figure of speech either. The letters win out, 4 to 3.

Kevin Colbert picked him up as a free agent following the 2002 season. And if you’ve seen Riemersma’s name on the site in the past, you can pretty much guarantee it was in reference to that. You can find those free agent look-backs here, here, and here. We seem to write about it roughly once a year. Riemersma is the football equivalent of a car inspection.

And yeah, that’s sorta what he was. Not a flashy, essential piece to the Steelers offense. But he was there, good size, decent blocker, could catch a little bit. Every team needs someone like him just as every car needs that little sticker on their windshield. You’re not thrilled about it but you’re not mad either unless something horrific has gone wrong.

In two seasons, he caught 17 passes and found the end zone three times. It was, unfortunately, his final touchdown that ended his pro career. An Achilles tear trying to stick the landing on a 26 yard touchdown against Jacksonville. It’s a play I remember for a reason I can’t explain, a synapse in my brain deciding to take a snapshot of the moment.

Ed Bouchette quipped at the time.

“Jay Riemersma caught a touchdown pass in his first game with the Steelers and his last, but that’s about the extent of any good fortune the tight end has had in his two seasons here.”

Harsh but fair. The Bouchette way.

I can’t find video of the injury but that’s for the best. It was particularly gruesome, the type the production truck opts against replaying.

Deciding not to attempt to make an NFL comeback, he jumped into coaching. He led his alma mater Zeeland High School for three seasons. The high school level is about teaching, something he was proud to say he did. Which is good because his time there wasn’t about winning, a career record of 1-26.

Riemersma jumped into politics, running for Congress in 2010. He lost by 700 votes, less than one percent, possibly in part due to last minute allegations over campaign violations. You can read the details here, but I’m certainly not going to get into the much of debating who was right or wrong.

This…has gotten more depressing than I thought it would be. Riemersma seems like a good guy with a wife and three kids but yeah, he’s had some obstacles in his career.

I promised myself I wouldn’t post anything really political (no debates please!) but you HAVE to check out this campaign ad he ran. It is delightfully cheesy in that small-budget, locally sourced political ad way. Twangy stock music, a green screen, and one of the absolutely most hilarious endings ever.

The words “Oh yeah, I’m pro gun,” after the starter pistol might be the funniest way I’ve ever seen a commercial come to an abrupt close.

He’s also got this Woody Harrelson-sounding vibe going on, which I dig. That’s how I’ll choose to remember you, Mr. Riemersma. So thank you. I will think of you when I watch Now You See Me 2 and Kingpin.

Jay Riemersma, your blast from the past.