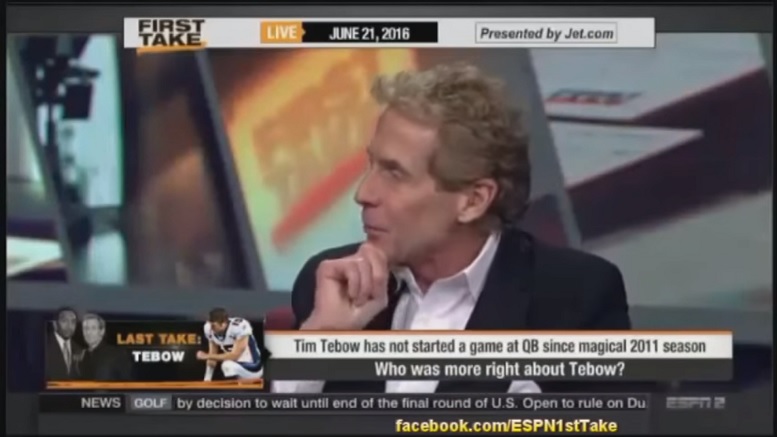 If you are a fan of the Pittsburgh Steelers you should probably be celebrating on this Tuesday as it was the last day you will have to watch Skip Bayless on ESPN’s “First Take.”

Bayless, a known lover of the Dallas Cowboys and Tim Tebow, made sure to take one final shot at the Steelers and his longtime co-host Stephen A. Smith on Tuesday by recalling his favorite sports memory.

“First playoff game, in Denver, against your childhood team, your favorite team from childhood, the Pittsburgh Steelers, featuring Ben Roethlisberger at quarterback, Tim Tebow threw for 316 yards. He can’t throw, he threw for 316 including an 80-yard strike to open overtime to Demaryius Thomas. Look, there he goes. It was the highlight of my career, Tim Tebow led an overtime victory in his first playoff start against the Pittsburgh Steelers and it might have been the low point of your professional career on television,” Bayless told Smith Tuesday morning.

“Unquestionably, the lowest point of my on-air career was Monday, January 9th of 2012, the day after Tim Tebow threw for 316 yards and the Denver Broncos beat the Pittsburgh Steelers in that game,” Smith said. “Anybody who knows me knows, I’m not one to call off from work. I gotta be really, really sick to call off from work, but I will tell you this, that day, I was so depressed, so sick at the thought of sitting across from Skip. I swear to you, I was looking for every excuse in the book not to show up on the air the next day because I was that disgusted.”

I can certainly relate to Smith and I’m sure that most of you reading this post can as well. That Tim Tebow to Demaryius Thomas overtime touchdown in the AFC Wildcard game is something that will forever be stuck in the back of my head and knowing that it ranks as Bayless’ favorite sports memory of all-time also turns my stomach.

This moment.
So many chills.
So few words.#MNQB – Lefty QBs https://t.co/62g8velOzN

Fortunately, we no longer have to listen to Bayless on ESPN as he is moving on to Fox Sports and you can bet that several current Steelers aren’t sad to see him go. When he announced Monday on Twitter that his last appearance on ESPN would be Tuesday, Steelers running back Le’Veon Bell quoted his tweet and added “good.”

Tomorrow is my last show on ESPN with my brother Stephen A. Smith. See you then.

Bayless has always been more agitator than analyst and the amount of stupid comments that he’s made over the years are uncountable. ESPN made a smart move by letting him walk away.