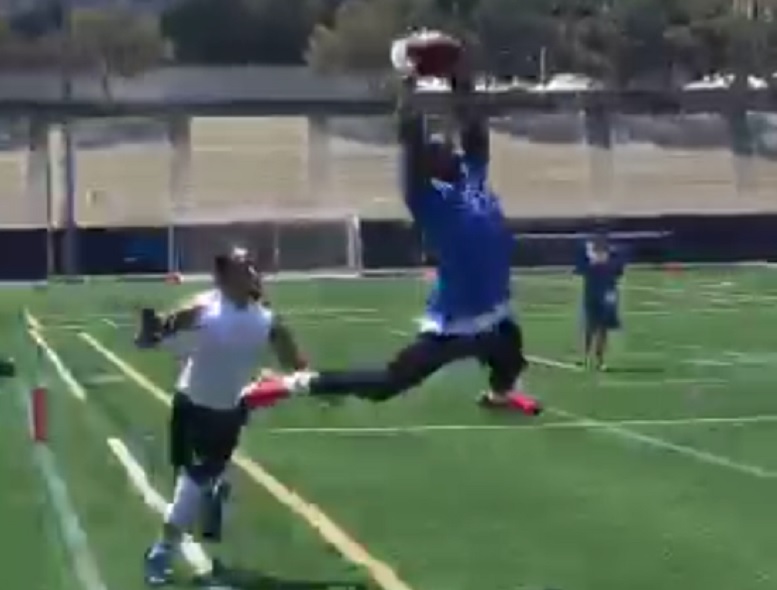 Despite a very busy schedule during the offseason, Pittsburgh Steelers wide receiver Antonio Brown never appears to miss a day of training. On Wednesday, Brown worked out with a Super Bowl-winning quarterback on the practices fields of UCLA.

That quarterback was Russell Wilson of the Seattle Seahawks and Brown broadcasted quite a bit of the Wednesday practice session on his Twitter account via Periscope.

If you hurry, you can watch replays of the videos below. During the third video, Brown was covered by what appears to be a few local college players and I probably don’t need to tell you who won most of those one-on-one battles. At one point, one of the young players told Brown, “You’re the greatest” to which the Steelers wide receiver replied, “Not yet.”

Brown and Wilson, along with several other high-profile NFL stars, have been out in Los Angeles the last few days shooting a new Sunday Night Football opening for NBC.

.@AntonioBrown84 in the house for the #SNF Open! #boomin pic.twitter.com/q9k7MvoxVr

You will probably be hard-pressed to find another player who markets himself on social media better than Brown does as he is very active on Twitter, Facebook, Instagram and Snapchat providing his fans with several first-hand looks at all aspects of his life.

In somewhat related news, Adam Rank of NFL.com posted 16 bold fantasy football predictions for 2016 on Wednesday with his boldest one being that Brown would score 20 touchdowns this season. In case you have forgotten, former NFL running back LaDainian Tomlinson currently owns the NFL single-season record for touchdowns with 31. As far as wide receivers go, Jerry Rice and Randy Moss each have scored 23 in a single season.