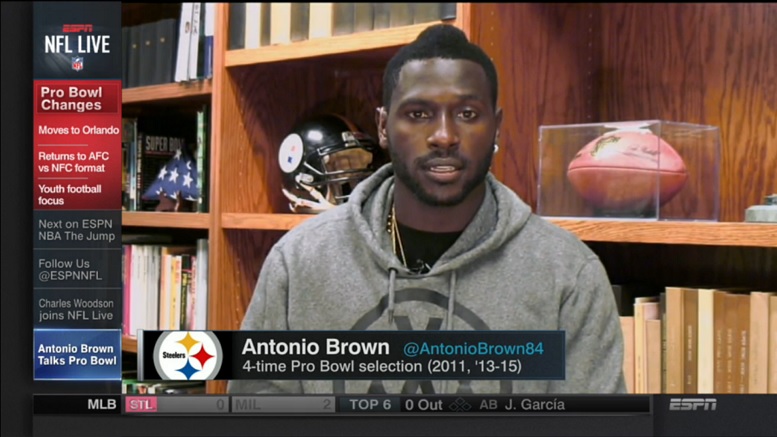 With a little more than 3 months remaining before the Pittsburgh Steelers kickoff their 2016 regular season on the road against the Washington Redskins, there’s yet to be any indication that the team will do anything with the contract of star wide receiver Antonio Brown, who is set to earn $6.25 million this year. On Wednesday, Brown was a guest on ESPN’s “NFL Live” and he was asked to comment on whether or not there have been contract talks with the Steelers.

“Well, right now I’m at the facility and all I’m just focused on is playing football and being around the guys,” said Brown. “The game has been great to me, the Steelers have been great to me and I think things will work out and take its toll. But I’m just singularly focused on being a great player, being here around the guys and my teammates, and representing my family. I think money’s not a need for me right now and I think things will work out as the time continues to unfold.”

Well, you can’t say that Brown’s agent Drew Rosenhaus hasn’t coached his client up well as that certainly was as good of a company line that you’ll likely ever hear a player use who has to believe deep down inside that he’s currently underpaid.

To hear Steelers general manager Kevin Colbert talk about Brown’s situation over the course of the last full year, the wide receiver won’t be given a contract extension until after the 2016 is over at the earliest. Should that wind up being the case, the best that Brown can hope for is that the Steelers pay him forward some of his 2017 money this year just as they did last year during the offseason.

After being asked about his contract situation, Brown was then asked if he believes he can catch 150 passes in 2016, which would be a new NFL single-season record.

“Well, you never know,” said Brown, who had a career-high 136 receptions for 1,834 yards and 10 touchdowns last season. “I play with a great quarterback, we have a great offensive line and anything is possible. But it’s not about stats, because no one remembers stats, it’s all about winning games and I think if we win a lot of games, it should be a fun year.”

When prodded more as it relates to him having a goal in mind for receptions in 2016, Brown refused to take the bait.

Brown certainly would make a great Pokémon character as no player in the NFL has more combined catches than he does over the course of the last three seasons.