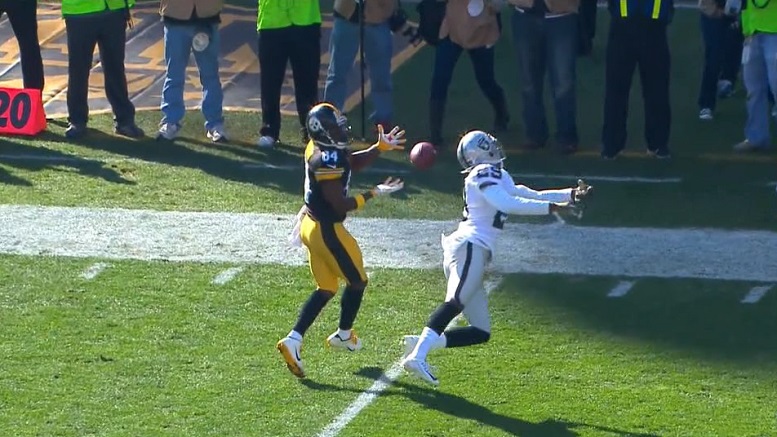 In the Steelers Week 9 game against the Oakland Raiders, Brown had a career performance that also now stands as a franchise-best as the wide receiver caught 17 passes for 284 yards. Brown’s 17 receptions, however, came via 23 targets and below are the 6 misconnnects that he had with quarterback Ben Roethlisberger.

Brown’s first failed reception against the Raiders came on a 4th and 4 play early in the game and as you can see in the two gifs below, the pass from Roethlisberger was broken up by cornerback David Amerson.

With just over 10 minutes remaining in the first quarter, Brown had the Raiders secondary beat deep but Roethlisberger’s pass was thrown just a few yards too long. Had Roethlisberger been on target, Brown probably easily scores on this play.

Roethlisberger again failed to connect with Brown with just over 10 minutes remaining in the first half and once again the blame goes on the Steelers quarterback as his hurried screen pass to the left side was too low and hit the ground.

On the very next play, Roethlisberger again went to Brown over the middle only to have Amerson break it up.

Facing a 3rd and 13 in the later stages of the third quarter with the game tied at 21, Roethlisberger floated a pass in the direction of Brown on the left side of the field and Amerson was there to pick it off.

The final misconnect between Roethlisberger and Brown came with 3:34 left in the third quarter on a 2nd and 10 play from the Raider 26-yard-line. This time, Roethlisberger’s low throw is the reason for the failed completion.

Brown’s 17th and final catch against the Raiders was a big one and it ultimately decided the game as he raced 57 yards down the right side of the field after catching this short pass on 3rd and 2 from Landry Jones, who had replaced an injured Roethlisberger at quarterback midway through the fourth quarter. Three plays later, Steelers kicker Chris Boswell won the game as time expired with an 18-yard field goal.

What a game this was for Brown, who at this point of the season has 69 catches for 1,002 yards and 3 touchdowns.