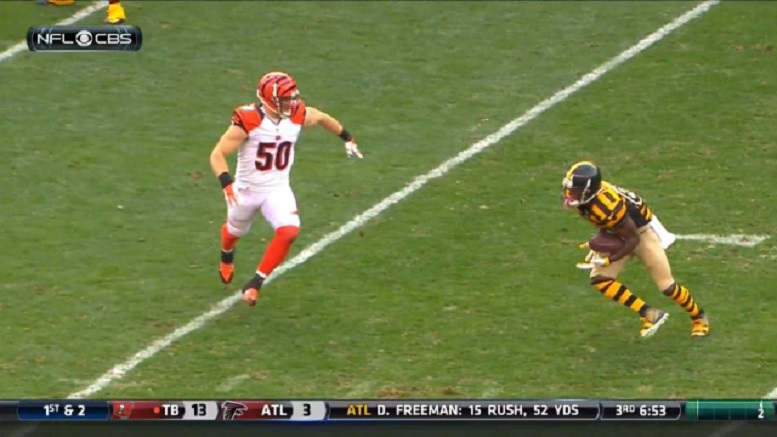 Brown had to be excited to get starting quarterback Ben Roethlisberger back for the Week 8 game against the Cincinnati Bengals and during the first half the two connected on all four pass attempts for 28 yards and a touchdown. The second half, however, didn’t go as well as the first for Brown and Roethlisberger as the Steelers wide receiver only managed to catch 2 more passes on the next 7 passes thrown his way from the quarterback.

We pick the action up in the third quarter with the Steelers leading by a point. On this 3rd and 5 play, Roethlisberger attempts to hit Brown deep down the right side of the field only to have his pass intercepted by safety Reggie Nelson. As you can see in the two gifs below, Roethlisberger likely thought Brown was going against a cornerback without any safety help over the top. Right before the football is snapped, however, Nelson drops into the deep third of the field as part of a cover-3 shell. He reads Roethlisberger’s deep throw all of the way and Brown never has a shot at catching this pass as a result.

Later on in the third quarter, Brown has perhaps his worst drop of the season on a 1st and 10 play from the Steelers own 8-yard-line. This play would have easily gone for a first down.

Continuing on into the third quarter, Roethlisberger decides to throw the football out of the back of the end zone in the direction of Brown on a 2nd and 5 play from the Bengals 18-yard-line. It was a great decision as Brown was blanketed by more than one Bengals defender.

With 2:55 left in the game and the Steelers trailing by 3-points, Roethlisberger is again intercepted by Nelson after overthrowing Brown down the seam. As you can see in the second of two gifs, Brown could only watch helplessly as the football sails way over his head and into the waiting arms of Nelson.

The final misconnect between Brown and Roethlisberger against the Bengals came on the game’s final play. You all probably remember it well as there were 4 seconds left and the Steelers had the football at the Bengals 16-yard-line with a chance to win. After being forced up into the pocket, Roethlisberger attempts to hit a well-covered Brown in the back of the end zone and while the Steelers wide receiver was able to catch the pass, it was too deep.

Always ending on a positive note, here is Brown’s lone touchdown against the Bengals. This is like cheating.