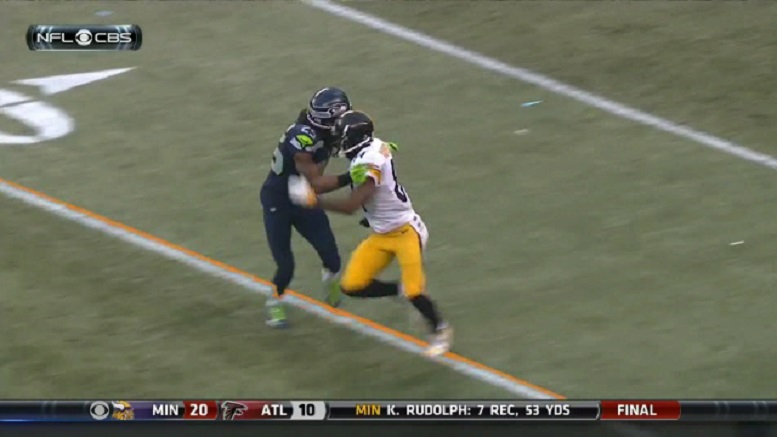 Following the Steelers week 11 bye, the long-anticipated battle between Brown and Seattle Seahawks cornerback Richard Sherman took place in Week 12. While Brown did catch 6 passes for 51 yards against the Seahawks, Sherman really came away as the winner of the battle as he held the Steelers wide receiver to a 50% catch percentage in addition to recording a controversial interception. Below are the six passes to Brown from quarterback Ben Roethlisberger that the two failed to connect on.

Early in the first quarter. Roethlisberger failed to connect with brown on a quick out to the right side. After the play was over, Roethlisberger looked to be unhappy with something that had happened on that side and maybe it was because Brown and running back DeAngelo Williams were in the same area of the field when the pass was delivered.

Late in the first quarter, Roethlisberger again failed to connect with Brown on this crossing route on 2nd and 2 from the Steelers 16-yard line. On the play, Sherman was picked off and Brown was free to run underneath as a result until he was grabbed and turned by middle linebacker Bobby Wagner. Brown and Roethlisberger both wanted a flag on this play but didn’t get it.

Late in the first quarter, Roethlisberger again failed to connect with Brown only this time it was a deep pass down the right side against the bump and run coverage of Sherman. The pass was too deep and there wasn’t much of a window for Roethlisberger to drop the football into with the safety closing over the top.

With just over 2 minutes remaining in the first half, Roethlisberger attempted to his Brown on a curl route but Sherman is once again right on top of the Steelers wide receiver in order to break up the pass.

I’m sure all of you remember this next play. At the start of the fourth quarter, Roethlisberger attempted to go deep to Brown down the left side of the field off of play action. Sherman, however, knocks Brown off his route early and the two players tangle feet causing the Steelers wide receiver to fall helplessly to the ground. Sherman winds up intercepting the pass uncontested as a result. Pass interference? Illegal contact? Well, neither was called on Sherman.

The final misconnect between Brown and Roethlisberger in the game against the Seahawks came with 6:35 remaining on 2nd and 12 with the Steelers trailing by 5 points. After Roethlisberger stepped up into the pocket to avoid the pass rush, he delivered a low pass to Brown with Sherman closely guarding him. It’s a good thing as Sherman would have likely intercepted the football had it been thrown higher.

While Brown didn’t have much success overall against Sherman and the officials in this game, he did haul in this nice back shoulder throw for 15 yards against the Seahawks cornerback late in the first quarter.