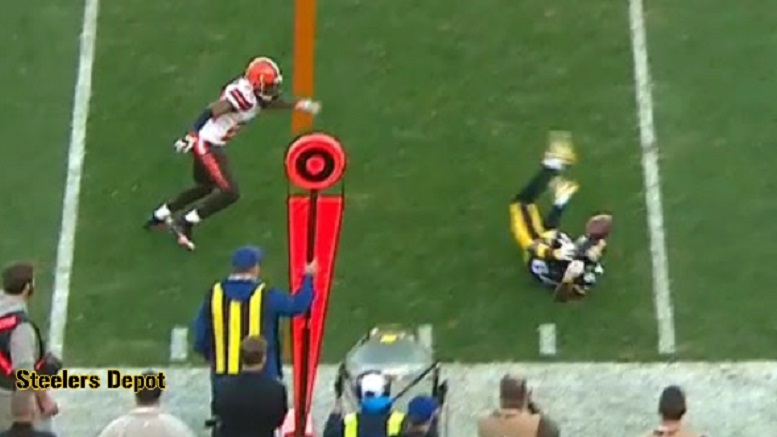 In the Steelers Week 10 win over the Cleveland Browns, quarterback Ben Roethlisberger entered the game early to replace injured starter Landry Jones and he would go on to throw for 379 yards and 3 touchdowns. Brown also had a solid showing in this game as he caught 10 passes for 139 yards and 2 touchdowns. Roethlisberger, however, failed to connect with Brown on 4 of his pass attempts in the game and as you will see in the gifs below, all of them were a result of poor throws and thus uncatchable.

With 8:06 left in the first quarter, Roethlisberger attempted to hit Brown deep down the right side on a 1st and 10 play. While Brown did manage to beat his defender on the play, the throw from Roethlisberger was just a tad too long.

On the very next play following a false start penalty, Roethlisberger once again failed to connect with Brown in the middle of the field as his pass hit a Browns defender square in the back. It was an ill-advised throw as the Browns had Brown bracketed tightly on the play.

Later on in the opening quarter, Roethlisberger attempted to hit Brown with a quick pass to the right side on a 3rd and 2 play but his pass was batted down at the line of scrimmage by Browns outside linebacker Nate Orchard.

The final misconnect between Roethlisberger and Brown against the Browns came on a 1st and 10 play with just over 10 minutes remaining in the third quarter. On this play, Roethlisberger attempted to throw a back shoulder pass to Brown but it was too far behind and low to the Steelers wide receiver.

Midway through the fourth quarter, Brown delivered one of the most memorable plays of the season that essentially sealed the win for the Steelers. On this play, Brown caught a short pass from Roethlisberger over the middle and beat the middle safety to the end zone for a 56-yard score. He ended the play with a forward somersault and stuck the landing to boot.

It’s also worth pointing out that Brown drew three pass interference penalties during this game as well.