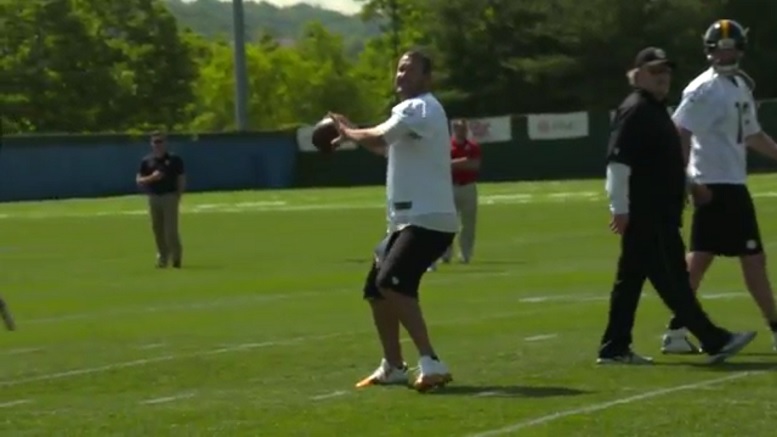 When the Pittsburgh Steelers begin their annual training camp in Latrobe later on this summer one of the key battles to watch this year will revolve around the several young wide receivers vying for the fifth spot on the team’s depth chart. On Tuesday, Steelers quarterback Ben Roethlisberger was asked if any of the team’s several young wide receivers have impressed so far during the offseason practices and without naming any names, he admitted that a few have.

“Yeah, some of the guys are doing some good things,” said Roethlisberger. “I always hesitate to talk too much about young guys because its early. There’s no pads on, I don’t anybody to get a big head early when the old quarterback starts talking about them. But, yes, there are some guys that are doing some really good things that just need to keep it up and need to kind of step up and take it to that next level with Martavis [Bryant] being down [suspended] and with some of the injuries that we have.”

Roethlisberger has been around the league long enough to know better than to put too much stock into what happens during the team’s offseason practices and especially when it comes to young wide receivers. With that said it’s good to hear that a few have already caught his eye during the “football in shorts” practices.

While the Steelers currently have several young wide receivers on their roster who figure to legitimately have a chance at claiming a spot on the team’s final 53 this year, one would think that second-year undrafted free agent Eli Rogers and this year’s seventh round selection Demarcus Ayers are atop that list. With that said, Canaan Severin and Shakim Phillips can’t entirely be ruled out as final 53 possibilities and especially if the coaching staff ultimately decides to keep a total of six wide receivers at the start of the season.

The battle between Rogers and Ayers could ultimately come down to which player can contribute more to the team as a punt returner. With that said, should neither of them prove to be a better option than fellow wide receiver Antonio Brown, that would certainly seem to open up things up a bit more for other players and especially if one of the other young wide receivers can prove to be an asset on special teams as a punt or kickoff coverage player.