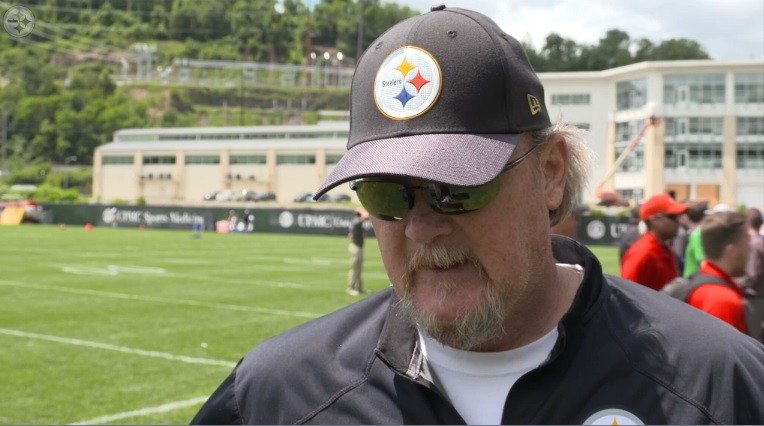 It has been an eventful, though not always pretty, professional career for Landry Jones.

But in his fourth season, he may have finally settled in.

Quarterbacks coach Randy Ficthtner spoke to Steelers.com’s Teresa Varley at the end of last week’s minicamp and had nothing but praise for Jones. While he said he was excited about the competition in the group, he seemed to say Jones would have the inside track on being Ben Roethlisberger’s backup.

“Absolutely. I’d expect it,” he told Varley in response to if he has confidence in Jones to be the immediate backup.

In his mind, Jones has improved in almost every area you can study.

“Decision-making increased, improved. Timing. He’s getting the ball out very well. He’s protecting the football. Accuracy, even in drill work all the way through individual and team and group work.”

There’s certainly a higher level of confidence in Jones, arguably because Jones now had tangible evidence to be confidence in himself. He started two games last season and also relieved Mike Vick against the Arizona Cardinals to lead the Steelers to a comeback victory. In that game, he went 8/12 for 168 yards and two touchdowns.

He would, however, struggle the following week versus Kansas City, barely completing 55% of his passes and being picked off twice.

Ed Bouchette reported last week Jones ran as the #2 quarterback for the spring so you can expect that pecking order – Ben, Landry, Bruce, Vaughan – for training camp. Bruce Gradkowski is the truly veteran safety net but it appears he was brought in to give the team stability at the bottom while continuing to push Jones.

At the end of the season, Mike Tomlin seemed to indicate doubt in Jones being the top backup – saying it would depend on what his options were – but after failing to add to the position, re-signing Gradkowski aside, that seems to be the likely course of action.

It may not be an ideal situation but there’s added comfort now that Jones has dealt with coming off the bench and preparing as the starter on a week’s notice, two mental hurdles any backup has to overcome. He’ll continue to receive a great deal of preseason snaps in 2016. Not to the extent of last year, a task Tomlin basically defined impossible, but enough to get him ready should something happen to Roethlisberger.