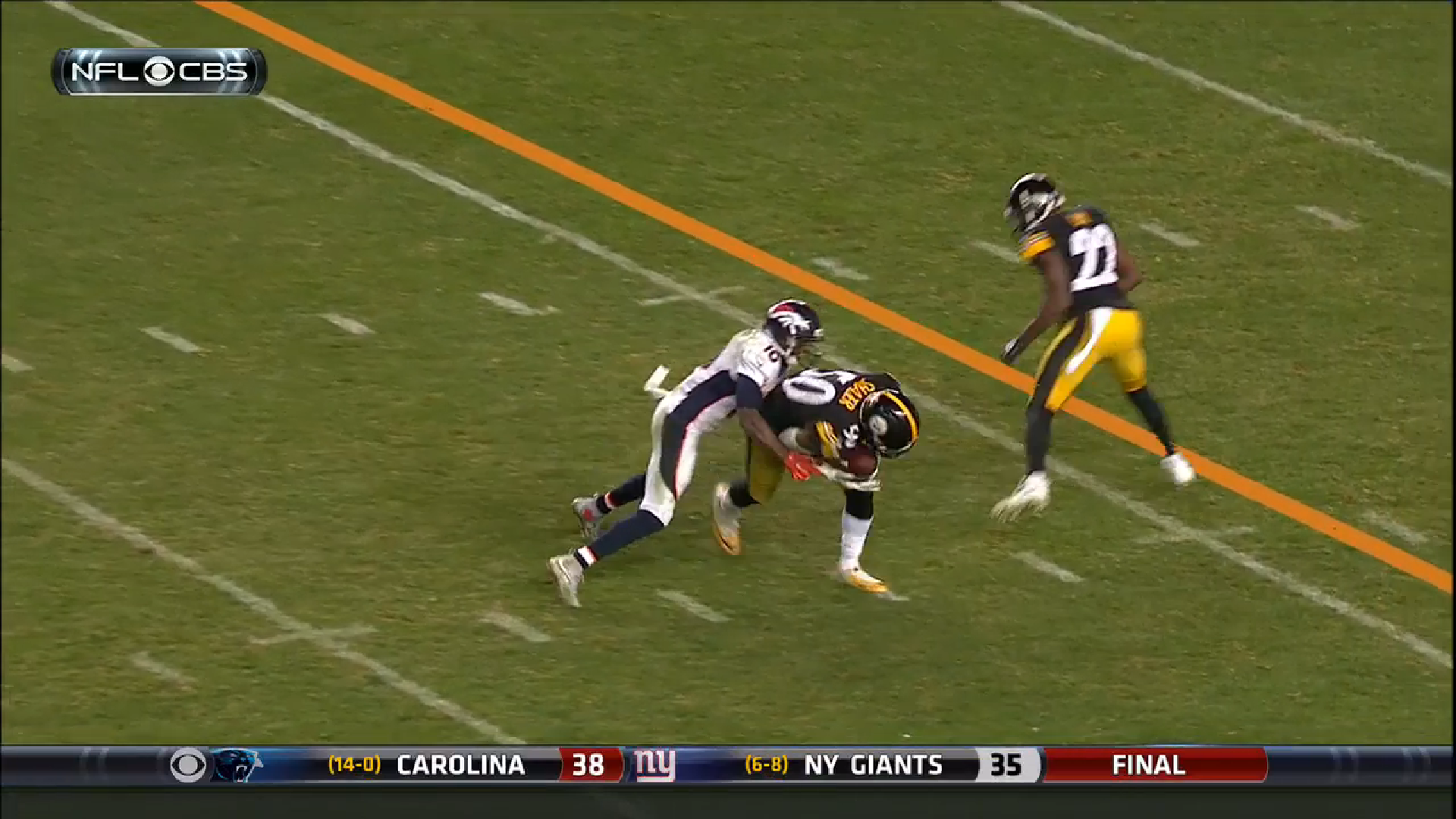 Ryan Shazier – Patience Is A Virtue

Ryan Shazier had a strong sophomore season. When healthy, Alex. Yeah, duh, I know. That’s the elephant in the room but I’m not going to ask him to “drink more milk” to get those bones a little tougher this season. When Shazier was out there, the finished product looked good.

And I’m not even referencing the “splash plays.” The tackles for loss, the turnovers, the big hits. Of course those were awesome, duh again, but the nuances of his game – the areas he struggled mightily in two years ago – were cleaned up.

His run defense saw a big improvement. No longer was he looking to duck blocks, use his athleticism college football allowed him to get away with, shooting gaps and causing havoc. Last year, he stayed square, took them on, and generally, held his gap. He is prone to being overpowered by drive blocks but that’ll always exist.

He’s a strong tackler, not in power, but form, always looking to wrap up and drive through with his lower half. Working through the trash, flowing from the backside on outside zones, saw a ton of improvement. He doesn’t get caught in the wash, takes the proper angle, and shows the ability to finish plays.

All that is to say this. Shazier’s progression is extremely encouraging. So where do we have to go from here? If there is one area I want to see him get a little better at, it’s playing a little more controlled in his reads. This should’t drop your jaw. Watch him and Bud Dupree pre-snap and you’ll see two kids waiting to open their first Christmas present; jittery, anxious, wanting to pounce. Potential energy, an electron wanting to be turned loose.

Boom, there they go.

There’s a consequence to that. Shazier will get himself out of position, bouncing around from side to side, reading the play. It’s not that he’s reading the play completely incorrectly. But NFL offenses are one giant magic act, a sleight of hand meant to deceive, tantalize, leave you thinking, how did they do that?

When offenses roll out their window dressing, that’s when I’ve seen Shazier get into trouble.

But like any good magic trick, it’s best to show, not tell. So let’s dive into our examples.

The first example comes against the Cincinnati Bengals in Week 14. Hue Jackson’s offense, one Shazier will still see twice a year up in Cleveland, has a lot going on.

The false pull by the center to give the illusion on a pin and pull scheme, getting Shazier to step like he’s going to scrap over the left end. The counter action by the back, away from him, getting him to change directions and bite hard to work back. And finally, the boot to the left (quarterback’s right), causing him to try and run across the field. You could play a Yakety Sax tune to this.

And the following week versus Denver. He initially reads the zone blocks of the right guard and center, moving to his left, but shoots down a gap when he sees the split zone motion of the tight end coming across. But the back never has intentions of cutting across, simply pressing the B gap  bubble (the goal of most inside zones), and hitting the hole. Shazier is out of the play, saved by Will Allen’s forced fumble.

Again, this isn’t Shazier moving without a purpose. He’s reading keys and reacting like all good linebackers should do. Defenders need to keep their feet moving and not get in concrete and yes, there are other issues on those plays (Tuitt getting reached block by the center in the second one, for example).

I’m just looking for Shazier to calm down a tad, like Lawrence Timmons, and be a little more patient. Really read the play. We know he has the explosiveness to close in a hurry.