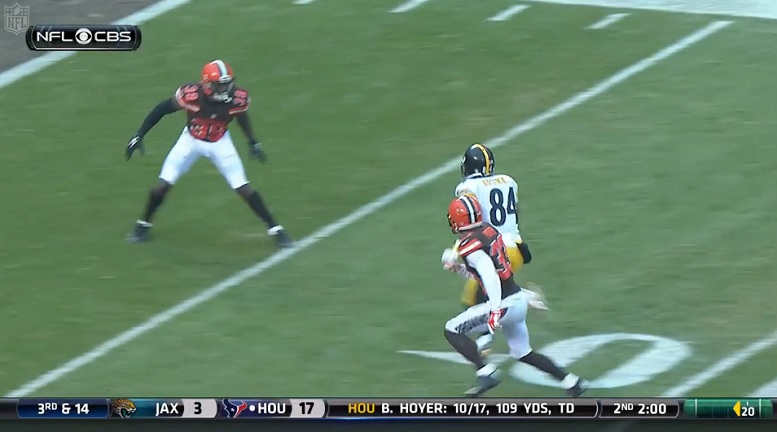 You know about Shark Week. Well this week seems to be Antonio Brown week, a new story or study popping up every day about the Pittsburgh Steelers’ star receiver.

But hey, how can you get tired of that million dollar smile?

NFL Network’s Nate Burleson, himself a former receiver, ranked his top five at the position. Antonio Brown finished above everyone, coming in at number one.. Here’s part of Burleson’s explanation.

“For me, regardless of his size and height. He isn’t going to wow you with his attributes. Maybe he’s not going to run a 4.2 or jump a 45 inch vertical. But I’ll tell you what, the separation, that’s the name of the game…if you can separate at the end of any route, then you’re going to get open and make plays. And he’s one of the best at that.”

Brian Baldinger, sitting on the panel, commented on the trust and rapport built up between Brown and Ben Roethlisberger. It’s hard to catch 125+ passes in back-to-back seasons without the highest amount of trust.

Though most would agree Brown is tops in the league, Burleson made some interesting choices in his QB ranking. He left out Aaron Rodgers of his top five altogether which led to obvious backlash from the Internet. Burleson did, however, include Ben Roethlisberger, who finished 5th on his list.

It is just another offseason list to fill air time and get all of us through the offseason (one month to go!), but there is a slightly elevated level of importance when a fellow receiver calls you the best in the game. Burleson’s career was never stellar but he’s been around some of the best in the game. He played with Randy Moss for two seasons and Calvin Johnson for four. Both of those guys will be Hall of Famers and if Brown continues his career arc, he’ll one day join them.