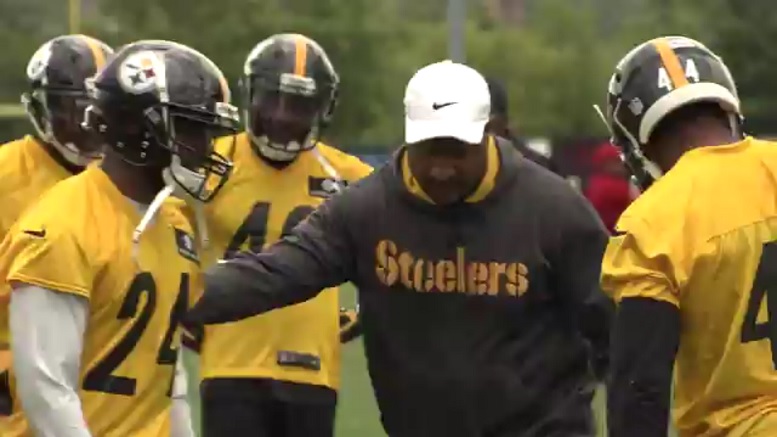 Early on in the offseason, Pittsburgh Steelers team president Art Rooney II made it a point to say that the team really needs to improve their pass defense in 2016 and general manager Kevin Colbert attempted to heed that directive by using the team’s first two draft picks on a cornerback and a safety in the form of Artie Burns and Sean Davis. Now that those two players are in the fold it will be up to Steelers defensive backs coach Carnell Lake to not only groom them to be contributors as fast as possible, but improve the rest of the young secondary as well.

“I’m counting on that,” Lake said this past week when asked if the Steelers will have an improved secondary in 2016. “One, we need to be, we want to keep improving on the foundation that we’ve laid. We had some guys who were helping us early last year, guys like Ross Cockrell, who will have a second year with us. They have some good experience playing, we’re going to need that. They’re going to have to help bring along the younger guys that are coming in, Artie Burns and Sean Davis, and that’s why I count on us having a better year.”

While Lake has only seen the team’s top two draft picks practice in shorts so far this offseason during the annual OTA practices, when asked to give his early assessment of Burns, who played his college football at Miami, it appears as though he likes what he’s seen so far out of the 21-year-old judging by his brief response.

“I think Artie is progressing very well,” said Lake. “He has the mentality that he wants to be there and be productive, and do the things that we want him to do. And if he doesn’t get it, he wants more reps at it and that’s a good sign.”

It’s yet to bee seen whether or not Burns or Davis can ultimately win starting jobs right out of training camp this year, but being as Lake managed to do it way back in 1989 after being drafted that year by the Steelers in the second round out of UCLA, he has a first-hand knowledge of what it will take for his young rookies to pull off such a daunting task.

“For me, that was my expectation going in,” said Lake, who is entering his sixth year as the Steelers defensive backs coach. “I think it starts with the player’s mentality. It’s just something that you have to set in your mind as a goal and I knew at first I’d have to be a good team player, but at the same time I got to be a little selfish because somebody’s got to not start and I have to move somebody out of the way, and you’ve got to set your mindset like that. I’m going to be a teammate, I’m not going to be friends with everybody right now, I’m competing for a job and I’ve got to show everyday why I should be the one that’s going to start. And so every practice, every opportunity to compete, whether it was conditioning drills, that was my opportunity to show why I needed to be starting and until I met my goal, that was my mentality.”

Another young secondary player who the Steelers hope can crack the starting lineup this season is cornerback Senquez Golson, who spent his rookie season on the team’s injured reserve list with an injured shoulder. With that said, the team’s 2015 second-round draft pick still isn’t moving in the right direction as he was forced to miss extensive practice time during the recently concluded OTA practices due to a soft tissue injury that he suffered. Because of all of the valuable practice time that the Mississippi product has missed since being drafted, it’s hard for Lake to really know what he really has in the young cornerback.

As the team now breaks for a week before reconvening in Pittsburgh for their annual mandatory minicamp, one would think that veteran defensive backs William Gay, Mike Mitchell and Robert Golden are the only three players who are currently locked into opening the 2016 regular season as starters in the secondary. That would leave Ross Cockrell, Golson, Burns, Davis and last year’s fourth-round draft pick, cornerback Doran Grant, as the five players battling for starting spots in the defense’s base and sub package groupings. Of those five players, Cockrell, as Lake eluded to, is the only one who has any real experience as he logged 682 defensive snaps during the 2015 regular season.

Inexperience in the secondary aside, Lake appears set on giving several of those young players an opportunity to win starting jobs this year during training camp just like former and legendary Steelers head coach Chuck Noll did during Lake’s early years in Pittsburgh.

“I got here three years under Chuck [Noll] and I have to say that Chuck’s mentality was, I’m going to start, or play, who I feel can do it and he gave rookie an opportunity,” recalled Lake. “So my take on it is maybe different than some. I look at it as if you can do it, even if you’re a rookie, then go for it.”

While thers hasn’t been a lot said or written about Golden so far this offseason after he was re-signed, Lake appears to be happy with the progress that the former undrafted safety has made as he enters his fifth-year with the Steelers.

“Rob’s always been a very smart player, a very versatile player,” said Lake. “I like his approach to the game. He picks up the defense very quickly and can make the right adjustments on the field like a good safety should do. He’s been instrumental to us, especially when we needed him to step in and come in to provide some depth when we needed it.”