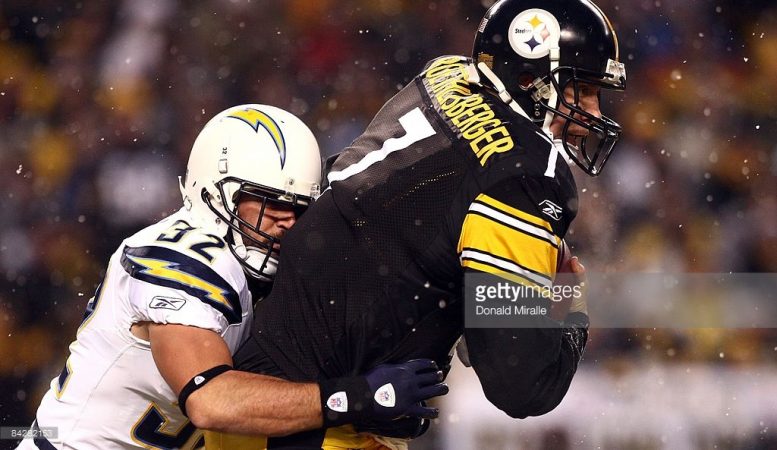 During the offseason the Baltimore Ravens signed unrestricted free agent safety Eric Weddle to a four year, $26 million contract after being courted by several teams. On Tuesday Pittsburgh Steelers quarterback Ben Roethlisberger admitted that he actively tried to get Wedddle to sign with the black and gold instead of with their AFC North rivals.

“I was trying to get him here,” Roethlisberger said when asked Tuesday if he tried to recruit Weddle. “That would have been good for us. Now, he’s the enemy.”

Even though Roethlisberger’s recruiting attempts failed, he said Tuesday that he still considers Weddle a good friend even though he’ll now have to face him twice during the regular season.

“The other day [Weddle] texted me and said, ‘We don’t talk anymore now?'” Roethlisberger said Tuesday. “It’s a little different, but he’s still a good friend.”

It didn’t take Roethlisberger’s recruitment story long to travel to Baltimore and Weddle was asked about the quarterback’s comments later Tuesday afternoon.

“Big Ben and I go back a bunch of years so we have a great relationship,” Weddle said Tuesday. “Obviously we were talking throughout the entire process and it didn’t end up [that way] and I’m glad I’m here [in Baltimore]. And I hope I get a bunch of wins against him and a bunch of interceptions, and maybe sprinkle in a couple of touchdowns.”

While the Steelers were reportedly one of four teams that Weddle was considering signing with this past offseason, one has to think that the money they were offering the three-time Pro Bowler and two-time First-Team All-Pro wasn’t close to what he ultimately received from the Ravens. The Steelers went on to ultimately draft safety Sean Davis in the second-round of the 2016 NFL Draft and now he’ll continue to work the remainder of the offseason at attempting to crack the starting lineup sometime during his rookie season.

As for the forthcoming battles between Roethlisberger and Weddle, the two should already know each other just as well on the field as they do off of it as they’ve already faced each other four times during their respective careers and that includes one playoff meeting. Roethlisberger has the upper hand right now over Weddle as the Steelers won three of those four games. Additionally, should Weddle intercept a Roethlisberger pass this upcoming season as a member of the Ravens, it will be the first time he’s accomplished such a feat as he’s yet to pick off the Steelers quarterback during his career.

Weddle will get his first crack at Roethlisberger in Week 9 of the regular season and that game will be in Baltimore. The second meeting between the two teams will take place in Pittsburgh in Week 16 in a game that will be played on Christmas day.